Study: Medicare Patients Who Use Hospice Receive Better Care at a Lower Cost to the Government 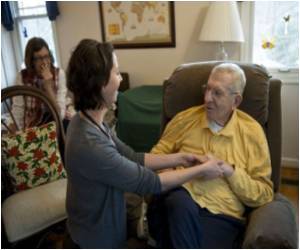 Medicare patients who enrolled in hospice received better care at a significantly lower cost to the government than those who did not use the Medicare hospice benefit. The data indicate that annual savings to Medicare could amount to $2.4 million to $6.4 million, if 1,000 additional Medicare beneficiaries chose to enroll in hospice 53-105 days before death, or 15-30 days prior to death.

The study, led by researchers at the Icahn School of Medicine at Mount Sinai, is published in the March issue of Health Affairs. It is part of Health Affairs Care Span series, funded by The SCAN Foundation, which includes articles about long term services, end of life issues and other aging issues.

"Considerable evidence supports that Hospice significantly enhances quality of care for patients and their families near the end of life, but the impact of hospice on Medicare costs remains an ongoing debate," said the study's lead author, Amy S. Kelley, MD, MSHS, Assistant Professor of Geriatrics and Palliative Medicine at Icahn School of Medicine at Mount Sinai. "Our study is the first to combine rich survey data and Medicare claims to demonstrate that an investment in the Medicare hospice benefit could translate into millions of dollars saved annually for the Medicare system and higher quality care for patients and families."


"To create the most value - both in terms of higher quality of care and lower cost - providers need to ensure that patients who could benefit from hospice know it's an available and accessible option," said Dr. Kelley.
Advertisement
Researchers also found that hospice enrollment was associated with significant reductions in admissions to hospital and intensive care units, days spent in a hospital, rates of 30-day readmissions and in-hospital death.

For this study, researchers used survey data from 3,069 subjects within the National Institute of Aging's Health and Retirement Study as well as their individual Medicare claims to compare the Medicare costs of patients who received hospice care to those of patients who did not. In using data from the Health and Retirement Study, researchers were able to compare patients with similar social, economic and health care histories, creating a more accurate comparison than using Medicare claims alone.

Researchers examined four different periods of hospice enrollment: the three most common enrollment periods, 1-7, 8-14, and 15-30 days before death, as well as 53-105 days prior to death. They also investigated both the source of hospice-related savings such as hospital admissions, hospital and intensive care unit days and hospice's impact on selected measures of quality of care at the end of life such as 30-day readmission rate and in-hospital death.

About The Mount Sinai Medical Center

The Mount Sinai Medical Center encompasses both The Mount Sinai Hospital and Mount Sinai School of Medicine. Established in 1968, Mount Sinai School of Medicine is one of the leading medical schools in the United States. The Medical School is noted for innovation in education, biomedical research, clinical care delivery, and local and global community service. It has more than 3,400 faculty in 32 departments and 14 research institutes, and ranks among the top 20 medical schools both in National Institutes of Health (NIH) funding and by U.S. News & World Report.

Care Homes and Hospices in Wales may Be Subjected to Regular Inspections
New proposals by All-Wales Palliative Care Planning Group call for regular inspections of care ......