Study Links Chemicals in Consumer Products to ADHD in Kids 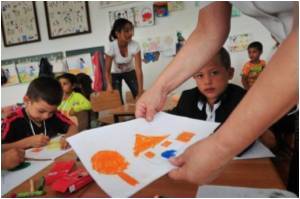 A US study has suggested a link between polyfluoroalkyl chemicals (PFCs), industrial compounds which are widely used in many consumer products, and attention deficit hyperactivity disorder (ADHD) in children.

The study, led by Boston University School of Public Health researchers, used data from the National Health and Nutrition Examination Survey (NHANES) to compare the PFC levels found in serum samples taken from 571 children, ages 12 to 15.

The parents of 48 of these children reported their children were diagnosed with ADHD, one of the most common neuro-developmental disorders in children.


In a 2003-2004 survey, NHANES examined 2,094 blood samples taken from the U.S. population and found more than 98 percent of the sample had detectable serum levels of PFCs, according to the study.

Medindia offers a milestone chart for the growing child, by which we can determine the activities of the baby at various stages of the growth.
Advertisement
Although the study indicates there is a link between PFCs and ADHD, lead author Kate Hoffman said it is not known if there is a causal relationship between the two.

"There's a link between this exposure and outcome but we're not really sure what way that goes," said Hoffman of Boston University School of Public Health (BUSPH).

"What we can say is children with this outcome tend to have higher levels of PFCs in their blood."

Because the PFC measurements were collected at the same time as the parental report of ADHD diagnosis, Hoffman said it is unknown whether children with ADHD engage in behavior leading to increased PFC exposure or if higher serum PFC levels in children result in ADHD.

The researchers examined the connection between PFC's and samples from children in which there were parental reports of ADHD diagnosis.

The findings were published in the journal Environmental Health Perspectives.

Nutritional Assessment Calculator helps to find out if you child is undernourished or malnourished.
Advertisement
Advertisement

Dyslexia is a reading disability that occurs when the brain does not properly recognize and process certain ...