Study Linking GM Corn to Cancer is a Scientific Non-event 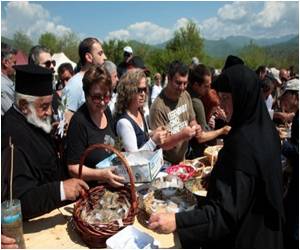 "This work does not enable any reliable conclusion to be drawn," they said, adding bluntly that the affair helped "spread fear among the public."

The joint statement -- an extremely rare event in French science -- was signed by the national academies of agriculture, medicine, pharmacy, sciences, technology and veterinary studies.


It was sparked by research published in September that said rats fed with so-called NK603 corn and/or doses of Roundup herbicide developed tumours.

Breast cancer is one of the leading causes of cancer deaths among women. It is often said that a woman who breast-feeds is at a lower risk of developing cancer compared to another who does not .Are these mere old wives tales or is there some truth in it? This quiz on breast cancer has all the details.
Advertisement
The paper, led by Gilles-Eric Seralini at the University of Caen, unleashed a storm in Europe, where GM crops are a highly sensitive issue.

Critics accused Seralini of manipulating the media to boost the impact of his findings, branded his experiments as shoddy or fraught with gaps or bias.

Two fast-track official investigations into the study, ordered by the government, are due to be unveiled on Monday.

"Given the numerous gaps in methods and interpretation, the data presented in this article cannot challenge previous studies which have concluded that NK603 corn is harmless from the health point of view, as are, more generally, genetically modified plants that have been authorised for consumption by animals and humans."

In withering terms, it dismissed the study as "a scientific non-event."

"Hyping the reputation of a scientist or a team is a serious misdemeanour when it helps to spread fear among the public that is not based on any firm conclusion," the academies said.

NK603 is a corn, also called maize, made by US agribusiness giant Monsanto.

It has been engineered to make it resistant to Monsanto's herbicide Roundup.

This enables farmers to douse fields with the weedkiller in a single go, thus offering substantial savings.

The study was published on September 19 in a peer-reviewed specialist journal called Food and Chemical Toxicology.

Seralini is a well-known opponent of GM crops, and his research was funded in part by an alliance comprising anti-GM campaigners and supermarket chains that have invested heavily in organic food.

Funding for scientific research by a partisan group or commercial interest is not at all unusual.

To avoid any bias, the results are supposed to be scrutinised by independent scientists -- the peer review -- before they are published.

But the academies said that, in this particular case, peer review had failed.

"Certain articles published in the international journals, including some of the most reputable, are sometimes of mediocre quality or are later revealed to be inaccurate," they said.

The study claimed to be the first to look at rats and GM crops over the rodents' normal lifespan of two years, as opposed to the standard 90 days. Two hundred male and female rats were split into 10 groups of 10 animals.

One was a "control" group which was given ordinary rat food that contained 33 percent non-GM corn, and plain water.

Three groups were given ordinary rat food and water with increasing doses of Roundup, reflecting various concentrations of the herbicide in the food chain.

The other six were fed rat food of which 11, 22 or 33 percent comprised NK603 corn, either treated or not with Roundup when the corn was grown.

The researchers said they found that NK603 and Roundup both caused similar damage to the rats' health, whether they were consumed together or on their own.

"For the first time ever, a GM organism and a herbicide have been evaluated for their long-term impact on health, and more thoroughly than by governments or the industry," Seralini told AFP on September 19. "The results are alarming."

But the six academies said "conventional statistical analysis... showed no significant difference between the (rat) groups... in contrary to the wording used by the authors of the article for the public."

The six said they "considered it unnecessary" for them to carry out a deeper investigation into Seralini's study, as probes are being carried out in parallel by the National Agency for Food Safety (ANSES) and the Higher Biotechnologies Council (HCB).

Official watchdogs in Germany and in Australia and New Zealand, as well as the European Food Safety Authority (EFSA) have also cast doubt on the paper's conclusions.

Top Ten Budget-Friendly Foods
News Archive
News Resource
Advertisement
News Category
Milestone In Voluntary Blood Donation Achieved Samsung Reinvents Toilet for the Poor Which is a Better Form of Exercise: Daily or Weekly? First Phase of Foot-and-Mouth Disease Vaccination Shocking News: Polio Cases Return After a Decade in the US
More News
Sign up for Wellness Consult a Doctor Sign up for Selfcare