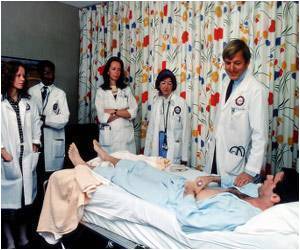 According to a study, identifying risk factors in hospital readmissions could help improve patient care and hospital bottom lines.

This study is recently completed by Georgia State University's Experimental Economics Center and a team from the Emory University School of Medicine.

Clinicians believe that electronic exchange of health information will have a positive impact on improving the quality of patient care, coordinating care and meeting the demands of new care models.
Advertisement

The study, supported by a $1.2 million, three-year award to Georgia State's Andrew Young School of Policy Studies and Emory School of Medicine from the National Institutes of Health's National Institute on Aging, identifies factors associated with hospital readmission within 30 days after surgery procedures. This is the first phase in a larger collaborative study on discharge decisions. The study findings appeared last month in the Journal of the American College of Surgeons.


"We are working to, first of all, find out the causes of readmission of patients at Emory hospital, and that is the first stage of dealing with the problem," said economist and Experimental Economics Center Director James C. Cox, the lead Georgia State researcher on the project. "Having identified the characteristics of patients who are readmitted, we then start looking for ways to alter practice to bring readmission rates down in the future."

Patient Care In The ICU Improved By Robots

This study began well before the recent news that, as of this month, hospitals will be penalized for having high numbers of discharged Medicare patients readmitted within 30 days. The penalty is part of the Affordable Care Act and will be calculated by comparing a hospital's readmission rate of certain kinds of patients to national averages.

"[This research] becomes even more important than it was previously now that Medicare has made this a priority," Cox says.

The current stage of research in this ongoing study entails further collaboration with experts in decision-making at Georgia State's Experimental Economics Center to develop decision support software that will help improve outcomes. Reducing readmissions by even a small number can have a significant impact on hospital budgets and operations.

Cox, Sadiraj and Schnier, along with co-researchers at Emory, have already completed laboratory experiments testing their decision support software and are working to analyze that data before another round of testing. The final stage in this research process will be to roll the decision-making software out onto the patient wards.

A new report published in the journal BMC Medicine reveals that care given to the patient by a properly supervised resident is as good as that of fully trained doctors.
Advertisement
<< Mentaly Ill Children Are Often Identified As Bullies
Undocumented Children In Sweden Will Have Access To Educati... >>

Patient Care can be Improved by Revised Glioblastoma Classification

The system used by doctors since the 1990s to determine the prognosis of people with glioblastoma, which is the most devastating of malignant brain tumors, has been revised by researchers.
Advertisement
News A-Z
A B C D E F G H I J K L M N O P Q R S T U V W X Y Z
What's New on Medindia

Are Menopause Symptoms Troubling You?: Try these Options
View all
News Archive
News Resource
News Category
Why Mosquitoes are Attracted to Only Some People? Norovirus, Stomach Viruses can Spread Through Saliva Putting the Brakes on a Bacterium That Cause Digestive Problem Monkeypox May Become a Sexually Transmitted Disease in America This Strain Poses World's Greatest Threat to Human Health
More News
Sign up for Wellness Consult a Doctor Sign up for Selfcare