Study Finds Pomegranate Juice to Be Safe With Medications

A new study has put to rest fears that pomegranate juice may interfere with the metabolism of drugs by finding that it does not interact with oral or intravenous medication.

The study was carried out by researchers at Tufts University School of Medicine led by Dr. David Greenblatt.

Previous studies had raised fears that pomegranate juice, like grapefruit juice, may interfere with the metabolism of drugs by inhibiting CYP3A, an enzyme that allows the body to transform and eliminate a drug.


However, the new study showed that this is not the case.

As a part of first study using human subjects, the researchers used both pomegranate juice and water, and found that both produced similarly negligible drug interactions.

The test drug was administered to the subjects orally and intravenously, and they drank either pomegranate juice, grapefruit juice, or water the night before and the morning of the test. The subjects' blood was then analyzed to see whether the enzyme CYP3A was affected by measuring metabolism.

The results were compared among the groups that ingested pomegranate juice, grapefruit juice, and water.

Based on the results the researchers stated that they were confident that pomegranate juice is safe for patients taking medications.

"Despite the suggestions from other studies, we have found that pomegranate juice does not produce drug interactions. This is the first time drug interactions have been studied in humans, so we are now confident that pomegranate juice is safe for patients taking medications," said Dr. David Greenblatt, Professor, Department of Pharmacology and Experimental Therapeutics at Tufts University.

The study, entitled "Pomegranate Juice Does Not Impair Clearance of Oral or Intravenous Midazolam, a Probe for Cytochrome P450-3A Activity: Comparison with Grapefruit Juice," was published in February 2007 in the Journal of Clinical Pharmacology. 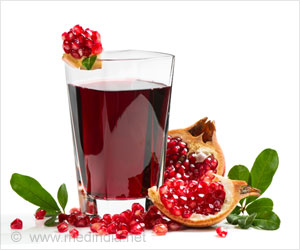