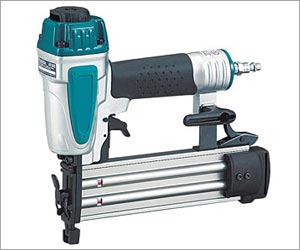 A new study has found that young males in the work environment are at greatest risk of sustaining a nail gun injury to their non-dominant hand.

Writing in the latest Early View issue of Emergency Medicine Australasia, the journal of the Australasian College for Emergency Medicine, Dr James Ling, Dr Natalie Ong, and Dr John North, all from Brisbane's Princess Alexandra Hospital, said nail guns are commonly used in the building and construction industry because they increase productivity and are technically easy to operate.

A new study has found that people who used a workplace wellness center on frequent basis reported an improvement in their overall quality-of-life.
Advertisement

However, there has been an increase in the frequency of nail gun-associated injuries, especially in work-related settings.


Public consumers are also at risk of injury, the researchers said.

A previous study showed a three times increase of ED presentations from consumer-related nail gun injuries from 1991 to 2005, which coincided with the availability of pneumatic nail guns to the general public.

Policy Changes Have Reduced Exposure to Secondhand Smoke at Workplace

A new study reveals that new policy changes have helped reduce the exposure to tobacco smoke in workplaces.
Advertisement
In the present study, only four cases (4.6%) were sustained in a non-work-related setting.

Information obtained from the Queensland Employee Injury Data Base shows an average of 81 workers' compensation claims for nail gun injuries each year over the past five years in Queensland.

Each case subsequently resulted in an average of 15 days off work.

"Whilst nail gun injuries involving the skull, chest and abdomen have been reported, the vast majority of injuries occur to the upper and lower limbs."

Nail gun injuries most often occur in a contaminated environment and each nail can contain metal barbs or may be coated with polymer or plastic which can become embedded in the wound.

Also, the nail may potentially be discharged into the body with a significant kinetic energy causing marked soft tissue damage.

Potential complications of nail gun injuries are direct damage to soft tissues, tendons, and bones and can result in infections and septic arthritis.

Out of 87 cases identified in this study, which was conducted between January 2007 and July 2012, 58% underwent surgery, 32% were treated solely in the emergency department, and 10% were transferred to a private facility.

At the time of operation, 14% of cases had tendon, joint or neurovascular involvement and 20% had retained foreign material.

The researchers said surgery for such injuries is generally short and safe, involving removal of embedded material, repair of structural damage and a sterile washout.

Desk Rage is a Reality at the Workplace

A recent research in Britain has revealed that the average office worker is short tempered or angry at his work desk nearly two times in a day.
Advertisement
<< New Light Shed On Muscle-weakening Disease Myasthenia Gravi...
In Women With Gestational Diabetes Obesity Is A Cause for D... >>