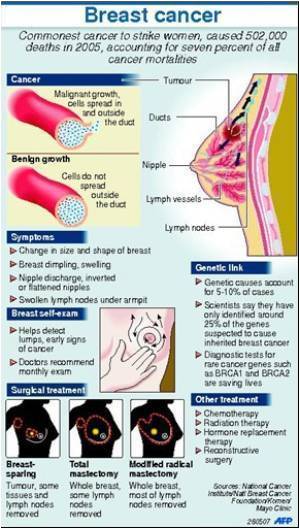 A study presented at the Third AACR Conference on The Science of Cancer Health Disparities found that Puerto Rican women who had breast cancer that lacked estrogen and progesterone receptors and did not overexpress the HER2neu protein (triple-negative) had worse survival than those with other types of invasive breast cancer.

"As the incidence of breast cancer rises in Puerto Rico, following U.S. trends, it is important to understand the association of disease subtypes with survival," said Ana P. Ortiz Martinez, M.P.H., Ph.D., associate professor and researcher at the University of Puerto Rico Cancer Center and the department of biostatistics and epidemiology, Graduate School of Public Health, University of Puerto Rico. "Breast cancer is a complex disease, with distinct subtypes with widely differing therapeutic indications and clinical outcomes."
Advertisement

This is the first published study on the impact of tumor subtypes and other clinical factors on breast cancer survival in Puerto Rico.


Researchers analyzed data for 974 female patients with invasive breast cancer who were diagnosed and treated in two main hospitals in Puerto Rico from 2000 to 2005.
Advertisement
The risk of breast cancer death for Puerto Rican women who had the triple-negative breast cancer subtype was more than twice as high as women with other tumor subtypes, even after accounting for a woman's age and cancer stage at diagnosis.

Women who were 50 years old or younger at the time of diagnosis and had regional/distant disease were also more likely to die as a result of their breast cancer.

Of the women studied, 22.5 percent had breast cancer that was HER2neu-positive (meaning that it overexpressed this protein); 60.9 percent of the breast cancers were positive for estrogen or progesterone receptors, but negative for HER2neu; and 16.6 percent were triple negative, neither overexpressing HER2neu nor receptive to estrogen or progesterone.

Findings, which were consistent with results described in previous studies of U.S. populations, will be useful in the development of cancer control strategies in Puerto Rico and may have an impact on future studies of targeted therapies to improve breast cancer survival in other Hispanic populations, said Ortiz Martinez.