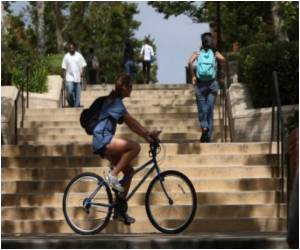 The reason why cortisol, the so-called stress hormone, seems to behave in contradictory ways in children has been discovered by scientists.

Now, researchers may have resolved the cortisol paradox.


In a groundbreaking study, researchers at Concordia University and the Centre for Research in Human Development have linked cortisol levels not simply to behavior problems, but to the length of time individuals have experienced behavior problems.

Tap into the powers of mind-body therapy called yoga and find out how you can use yoga for effective stress management.
Advertisement
"We studied the relationship between cortisol levels in young people with problematic behaviour such as aggression or depression, and the length of time since the onset of these behaviours," explained Paula Ruttle, lead author and PhD candidate at Concordia's Department of Psychology.

"Cortisol levels were abnormally high around the time problem behaviours began, but abnormally low when they had been present for a long time."

To obtain subjects' cortisol levels, researchers analyzed saliva samples taken from 96 young people during early adolescence. They then matched cortisol levels to behavioral assessments taken in childhood and again during adolescence. Problem behaviours were classified as either "internalizing" (depression and anxiety) or "externalizing" (aggression, attentional problems).

Youngsters who developed depression-like symptoms or anxiety problems in adolescence had high levels of cortisol. However, those who developed symptoms earlier had abnormally low cortisol levels.

It was concluded that Cortisol levels go up when individuals are first stressed by depression or anxiety, but then decline again if they experience stress for an extended period.

The study has been published in the journal Hormones and Behavior.

Source: ANI
Advertisement
<< Research Finds Early Defects in Sensory Synapses in Motor N...
Place of Residence can Have a Big Impact on Your Life >>

The Essence of Yoga Daily Calorie Requirements Blood Donation - Recipients Indian Medical Journals Drug Side Effects Calculator Selfie Addiction Calculator Vent Forte (Theophylline) Color Blindness Calculator Noscaphene (Noscapine) Sanatogen
This site uses cookies to deliver our services.By using our site, you acknowledge that you have read and understand our Cookie Policy, Privacy Policy, and our Terms of Use  Ok, Got it. Close
×