Study Examines Vaccines To Be Used Against Plague 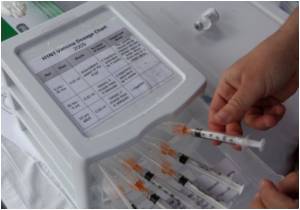 Developing new vaccines to protect against diseases that plague humans is fraught with numerous challenges. One of the major challenges is the fact that microbes tend to vary how they look on the surface to avoid being identified and destroyed by the immune system. However, researchers from Brigham and Women's Hospital (BWH) have discovered a sugar polymer that is common on the cell surface of several pathogens. This common sugar molecule makes it a promising target for the development of a broad-spectrum vaccine that can protect against numerous deadly microbes expressing this sugar on their cell surface.

The study will appear online in Proceedings of the National Academy of Sciences the week of May 27, 2013.

The researchers report that the sugar, known as beta-1-6-linked poly-N-acetyl glucosamine, or PNAG, is made by more bacterial, fungal, and other microbial organisms than previously thought. According to the researchers, antibodies produced naturally by humans and animals do not offer complete protection against microbes that express PNAG on their cell surface because the natural antibodies kill these microbes poorly.


Given this, the researchers created vaccine-induced, non-human-derived antibodies that would respond to a synthetic form of PNAG; and these antibodies had the properties needed for killing microbes. The researchers also tested a human-derived antibody that was able to bind to both the natural and synthetic forms of PNAG and could also kill microbes producing PNAG.
Advertisement
When the researchers injected mice with these antibodies, they observed protection against local and systemic infections caused by several unrelated pathogens, such as Streptococcus pyogenes, the cause of strep throat; Streptococcus pneumoniae, the cause of deadly pneumonias in the young and the elderly; Listeria monocytogenes, a cause of potentially fatal food poisoning; Neisseria meningitidis serogroup B, a serious cause of meningitis; Candida albicans, a very difficult to treat fungal infection; and, most surprisingly, a very potent strain causing malaria in mice, a surrogate for the most serious form of human malaria known as cerebral malaria.

The researchers also found the PNAG polymer on the surface of microbes that cause gonorrhea, trichomoniasis, serious gastrointestinal infections and typhoid fever. Additionally, they detected PNAG material on bacteria in tissues of humans with infections such as otitis media (ear infections) and tuberculosisan important finding since it is critical that PNAG be produced during infection in order for the antibodies to do their job of killing and eliminating infectious agents.

"While we have known for awhile that staphylococci and several other bacteria including E. coli and some other microbes that cause hospital infections make PNAG, the new work expands this to a 'top 10 to 20' list of many of the major causes of serious human infections," said Gerald Pier, PhD, Division of Infectious Diseases, BWH Department of Medicine, Professor of Medicine, Microbiology and Immunobiology, Harvard Medical School, senior study author. "The possibility to use one agent to target so many different organisms including gonorrhea, TB and malaria is very exciting and unprecedented so far in the field of infectious diseases. However, whether or not one vaccine will work for any of these organisms, let alone many of them, will only be known once the vaccines and antibodies are thoroughly tested in humans."

A PNAG-based passive immunotherapy consisting of a fully human monoclonal antibody has been successfully tested in a phase I clinical trial for safety and pharmacokinetics in human volunteers, with no significant adverse events reported. Future testing will be conducted to further evaluate safety, dosage and effectiveness. A PNAG-based vaccine that can be injected into humans is also currently being produced with an expectation to begin human clinical trials in 2014.

Promising Strategy to Help Vaccines Outsmart HIV Highlighted By OHSU Research
A new discovery an ingenious method to ensure the body effectively reacts when infected with the ......