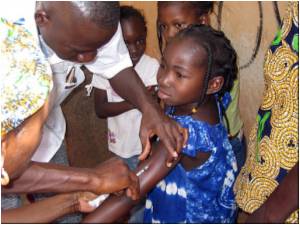 According to a study that included nearly 3,000 adults from Denmark, a diagnosis of meningococcal, pneumococcal, or Haemophilus influenzae meningitis in childhood was associated with lower educational achievement and economic self-sufficiency in adult life. The study can be found in the April 24 issue of JAMA.

Bacterial meningitis may lead to brain damage due to several factors, and survivors of childhood bacterial meningitis are at particular risk of hearing loss, seizure disorders, motor deficits, and cognitive impairment. Learning disabilities are well documented as a result of the disease. "To our knowledge, no previous study has examined functioning in adult life among persons diagnosed as having bacterial meningitis in childhood," the authors write.

Casper Roed, M.D., of Copenhagen University Hospital, Copenhagen, Denmark, and colleagues conducted a study to estimate educational achievement and economic self-sufficiency among children surviving bacterial meningitis compared with the general population. The nationwide population-based cohort study used national registries of Danish-born children diagnosed as having meningococcal, pneumococcal, or H influenzae meningitis in the period 1977-2007 (n=2,784 patients). Comparison cohorts from the same population individually matched on age and sex were identified, as were siblings of all study participants. The end of the study period was 2010. The primary measured outcomes were cumulative incidences of completed vocational education, high school education, higher education, time to first full year of economic self-sufficiency, and receipt of disability pension and differences in these outcomes at age 35 years among meningitis patients, comparison cohorts, and siblings.

The authors also found that at end of follow-up, an estimated 3.8 percent, 10.6 percent, and 4.3 percent fewer meningococcal, pneumococcal, and H influenzae meningitis patients, respectively, had been economically self-sufficient compared with the individuals from the comparison cohort, and 1.5 percent, 8.7 percent, and 3.7 percent, respectively, more patients received disability pension.

"Our study suggests that children diagnosed as having pneumococcal or H influenzae meningitis may benefit from follow-up into adulthood to identify those who could potentially benefit from psychosocial support."

Meningitis
Meninges are the three layers of membrane that cover the brain and infection of the cerebrospinal .....

Reyes Syndrome
Reye's syndrome is a medical emergency chiefly affecting children and teenagers and is marked by ......