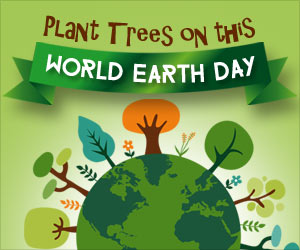 The 48th Earth Day celebrations saw participation from school children in awareness drives, campaigns in social media, emotional appeals from MNCs and a request from Prime Minister Narendra Modi to keep the planet clean and green.

While describing the Earth Day "a day of gratitude to mother earth", Modi said: "It is our duty to live in harmony with the plants, animals and birds we share the earth with. We owe this to our future generations."

Earth Day is being celebrated as an annual event on April 22 since 1970 to demonstrate support for environmental protection.
Advertisement
‘As part of the Earth Day activities, the US embassy, in cooperation with programme partner Clean Air Asia, organised a two-day campaign "Better Air, Better Earth" to promote air quality awareness.’

He hoped that this year's theme of "Environmental and Climate Literacy" would help in creating awareness about protecting nature and natural resources.


According to the Earth Day Network, a global environmental movement, April 22 marks the anniversary of the birth of the modern environment movement in 1970.

Earth Anthem is a Significant Contribution to Earth Day Celebrations: US Official

Jeniffer McIntyre, has described the Earth Anthem written by Abhay K as a significant contribution towards Earth Day, in a newsletter published by the United States Consulate General.
Advertisement
Also, hundreds of volunteers, including students and officials of the US embassy, were out on the streets here to promote air quality awareness among people of the national capital and conducted a survey.

The campaign involved volunteers from the embassies of the US, Sweden, Spain, the High Commission of Canada and Clean Air Asia's Youth Clean Air Network (YCan), who were posted at various locations here to record PM 2.5 levels and take a perception survey.

The campaign would continue on Sunday when the volunteers would record people's perception of air pollution in the city.

"We are proud to support Clean Air Asia's efforts to raise awareness about air quality in India. Projects like these are at the heart of this year's Earth Day theme -- environmental literacy," Richard Pinkham, Director of Programmes, New Delhi American Centre, said.

Manaswi Singha, a student of Delhi University, and Nishant, an engineering student of Delhi Technological University, who were conducting the survey, said that they chose to be a part of the campaign as they wanted to create awareness and understand the real cause of pollution.

Also, NGOs, Bombay Natural History Society (BNHS) and Wildlife SOS organised a Snake Awareness Workshop. The aim of the workshop was "to promote wildlife wakefulness among public and to mitigate the effects of wildlife human conflict".

During the workshop, the team of Wildlife SOS demonstrated how snakes play a key role in the functioning of the entire ecosystem.

Also, there was a campaign to create awareness among the masses to save water.

The doodle followed the story of a fox, who dreamt about an Earth that had been polluted and adversely affected by climate change.

Doing these small things could go a long way to help save the only known planet in the universe that harbours life, it said.

"Whatever you do today, we hope you're able to take a moment to savour and cherish this boundless, stunning Earth that we inhabit," Google said in a statement.

At an estimated 4.543 billion years of age, the Earth is also the densest planet in the solar system and the largest of the four terrestrial planets.

Oxygen Declining At A Faster Rate Now from Earth's Atmosphere

Collecting the geoneutrino data from the detectors will help researchers to measure the remaining fuel inside earth.

Find a Doctor Iron Intake Calculator Calculate Ideal Weight for Infants The Essence of Yoga Blood Pressure Calculator Nutam (400mg) (Piracetam) Turmeric Powder - Health Benefits, Uses & Side Effects Selfie Addiction Calculator Sanatogen Pregnancy Confirmation Calculator
This site uses cookies to deliver our services. By using our site, you acknowledge that you have read and understand our Cookie Policy, Privacy Policy, and our Terms of Use