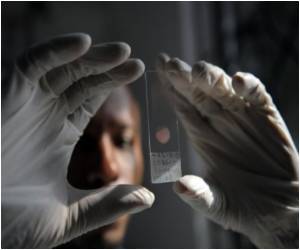 A new study says that people with HIV are three times as likely to suffer strokes. Researchers are now questioning if antiretroviral drugs could be to blame.

Among people living in the United States with the virus that causes AIDS, stroke hospitalizations rose 67 percent over the past decade, while in the general population they fell seven percent, said the study in the journal Neurology.

Researchers examined all stroke hospitalizations in the United States over the past 10 years and found that the total declined over the course of the decade with 71,742 fewer strokes overall.


But among people with HIV, 537 more strokes were tabulated in the same time period.

People with HIV showed an increase in a certain kind of stroke, called ischemic, which is caused by blood clots to the brain. Ischemic strokes are the most common type.

Encyclopedia section of medindia gives general info about HIV Clinical Features
Advertisement
"The average age for a stroke among people with HIV was in the 50s, which is much lower than that of those without HIV," said Bruce Ovbiagele, professor of neurosciences at the University of California, San Diego.

"This finding suggests that HIV or HIV treatments may be directly related to stroke occurrence."

Of the total 33.3 million people living with HIV in the world, at least 14.6 million were in need of antiretroviral therapy in 2009, said WHO and UNAIDS.

"While these therapies have greatly increased life expectancy, they may boost the presence of risk factors associated with stroke," said Ovbiagele.

"Another possibility is that longer exposure to HIV as a result of greater survival, even at low viral load levels, may allow for the virus to increase stroke risk."

Encyclopedia section of medindia explains in brief about the treatment for AIDS/HIV
Advertisement
<< Risk for Substance Use Through Depression High in Girls Who...
Cancer-Fighting Role for Cells Discovered by MIT Scientists >>