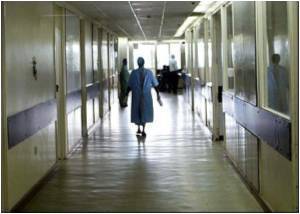 Stroke could be safely treated with an antibiotic that may also be suitable to administer along with tPA, the only FDA-approved drug therapy to treat clots, claim researchers.

A safety study in 60 stroke patients in Georgia, Kentucky and Oregon found the drug well tolerated even at three-and-one-half times the dose currently used for conditions such as rheumatoid arthritis, according to a research team led by the Medical College of Georgia and the University of Georgia.

"It's cheap, safe, well tolerated, easy to administer and can be given with tPA," said Dr. David Hess, chairman of the Department of Neurology in the MCG School of Medicine and corresponding author on the study in Stroke.


"This is an old drug that has been studied extensively in healthy young people," said Dr. Susan C. Fagan, professor of pharmacy at UGA, assistant dean for the MCG program of the UGA College of Pharmacy and the study's first author. "Now that we know it's also safe in a predominantly older stroke population, we can look more closely to identify the dose necessary to give us the pharmacologic effect we need."

Stroke is the third most common cause of death and the most prominent cause of physical deformity in the world
Advertisement
The researchers want to find a dose that can be used effectively in any patient, regardless of weight, so it can be given easily, even during transport to a hospital, Hess said. They saw no significant adverse effects in doses ranging from 200 to 700 milligrams.

The broad spectrum antibiotic, in use since the 1960s for a variety of infections, is currently prescribed as an anti-inflammatory for diseases such as arthritis. MCG and UGA animal studies indicate that the drug also reduces stroke damage in multiple ways - inhibiting white blood cells and enzymes that can destroy brain tissue and blood vessels immediately after a stroke and reducing brain cell suicide in the hours following a stroke.

The early-stage clinical trial funded by the National Institutes of Health, opens the door to a much larger clinical trial assessing the antibiotic's efficacy, Hess said. The researchers are pursuing federal funding for a 2,000-patient international trial.

In preparation, they are looking at recipients of the largest minocycline dose in the small trial to measure the impact on levels of stroke-associated inflammatory factors. They are also studying the drug's effect on matrix metalloproteinases, or MMPs, which are released during stroke and destroy the basement membrane of blood vessels and cause bleeding. Bleeding can significantly worsen stroke damage and is a major side effect of tPA.

Hess and Fagan believe the drugs can work synergistically to improve stroke outcomes.

Sixty percent of the patients in their study also received tPA. While they know these patients had lower MMPs levels because of minocycline treatment, the study was too small to accurately assess outcomes, Fagan said. Researchers suspect that tPA's bleeding risk is a major reason why nearly 15 years after FDA approval, fewer than 5 percent of hospitalized stroke patients get the clot buster.

In related research, MCG scientists have shown minocycline may be beneficial even before a stroke. Work led by Dr. Adviye Ergul, physiologist in the MCG Schools of Medicine and Graduate Studies, showed in diabetic rats that a daily dose of the drug reduces remodeling of blood vessels in the brain that increases stroke risk. The drug also helps stop bleeding that often follows a stroke. Diabetes dramatically increases stroke and heart attack risk. The work was published in August in the Journal of Cerebral Blood Flow and Metabolism.

While antibiotic resistance resulting from overuse has become a major health concern in the country, Fagan noted minocycline's use in stroke wouldn't contribute to the problem since it will only be given for a few days. In fact, the researchers found the drug remained active in the body longer in their older stroke patients than in younger patients receiving it for other reasons, which means the patients likely will only need a single dose for three days. She and Hess have been exploring minocycline's stroke potential for a decade.