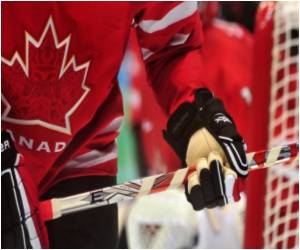 The eyewear features lenses that switch between transparent and opaque, producing stroboscopic visual conditions, much like a strobe light in your favorite dance club.

Earlier research using the stroboscopic eyewear during training showed improved vision, visual attention, and ability to anticipate the timing of moving items. But the small pilot study with Hurricanes players is the first to directly explore whether those effects can improve sports performance. The study appears online in the November-December issue of Athletic Training & Sports Health Care.


Players who trained with the strobe eyewear experienced an 18 percent performance improvement in a series of on-ice skill tests. A control group showed no change.
Advertisement
"From a sports perspective, you want to know if something is going to be an actual, viable training tool," said Stephen Mitroff, Ph.D., associate professor of psychology and neuroscience in the Duke Center for Cognitive Neuroscience. "If players train with it, will they likely get the benefits? Our previous work showed that stroboscopic training affected vision and attention, and here we explored if those changes can benefit sports performance."

The strobe eyewear forces the wearer's visual system to train in difficult conditions in much the same way that wearing ankle weights makes training harder for a runner, he said. The eyewear's lenses alternated at different rates, always with a clear state for a tenth of a second, and various opaque states ranging in intervals from 67 milliseconds to nine-tenths of a second.

The athletes were randomly divided into a five-player control group that completed normal training and a six-player strobe group that wore the eyewear once daily during normal training. Each group completed a performance assessment before and after training. Forwards were asked to perform a task that involved difficult skating before taking shots on goal, and defensemen were asked to skate in a circle before completing long passes.

Mitroff cautioned however, that these results are preliminary due to the small size of the pilot study. More research is needed to determine the true impact of the eyewear on performance. "That we observed an 18 percent improvement in professional athletes is pretty amazing." Mitroff said. "So, given that this is a small sample size, I would imagine that with more data the effect will be significant and real, but a smaller percent improvement."

Although the most immediate application of the strobe eyewear is in athletics, Mitroff said the potential does exist for it to have future impact in medical, military, and physical rehabilitation settings.
Source: Eurekalert
Advertisement
<< Dearth of Tobacco Quitting Centres in India, Say Experts
Nutrition Report Cards for a Healthier Initiative! >>

To Play Or Not To Play After A Concussion - Hockey Players Intrigued
TORONTO, Ont., May 27, 2009  When Chicago Blackhawk's leading scorer Martin Havlat returned to the ...