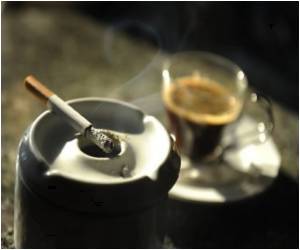 Hotels and restaurants in the northern Spanish town of Palencia closed on Wednesday to protest the country's tough anti-smoking law which took effect this year.

About 100 professionals from the sector also staged a demonstration, some carrying banners saying "If you don't smoke, we don't get paid. Let us live" and "Total ban, sector ruined."

Smokers stubbed out their cigarettes in tapas bars and restaurants across Spain as one of Europe's strictest anti-tobacco laws came into force on Sunday.
Advertisement

Another said "Zapatero, you should have been a hotelier," referring to Socialist Prime Minister Jose Luis Rodriguez Zapatero.


Trade associations said 60 to 70 percent of the hotels and restaurants in the town of around 80,000 people closed for the day.

It was the first major demonstration against the anti-smoking law, one of the strictest in Europe, since it was introduced on January 2.

Smokers took a last legal puff and stubbed out their cigarettes in tapas bars and restaurants across Spain on Sunday as one of Europe's strictest anti-tobacco laws came into force.
Advertisement
The new law bans smoking in all enclosed public spaces, including bars, restaurants and nightclubs and makes it illegal to smoke in children's parks or anywhere on school or hospital grounds.

The hotel and restaurant industry fears the law could cut sales by between five and 15 percent.

Last week, the Spanish Hotel and Catering Association launched an effort to obtain half a million signatures on a petition to demand that parliament change the legislation.

Spain has had an anti-smoking law since January 2006 but the impact was barely noticeable.

It banned smoking in the workplace, on public transport and in shops. But it allowed owners of bars, restaurants and cafes to decide whether to ban smoking or not. Most, faced with a drop in business, naturally chose to permit their customers to light up.

Lottery - the Hope for a Better Christmas in Spain

The annual Christmas lottery seems to be the last resort for Spaniards as they cut back on food and gifts in the economic crunch, but spend their money on tickets hoping for a win - and relief.
Advertisement
<< Oz Hospitals Ban Dads from Filming Birth After Media Report...
Pope Advises Youth Not to Replace 'Real Friends' With Virtu... >>

Spaniards will wake up on Sunday to find that what many consider an inalienable right -- puffing on a cigarette with a drink and some tapas at their local bar -- has become illegal overnight.
Advertisement
News A-Z
A B C D E F G H I J K L M N O P Q R S T U V W X Y Z
What's New on Medindia