Stress hormone manages the fixed circadian rhythm that controls everything from sleep needs to body temperature, the researchers have found.

The areas of the brain are not directly linked by neurons, and this made researchers at the University of Copenhagen curious. 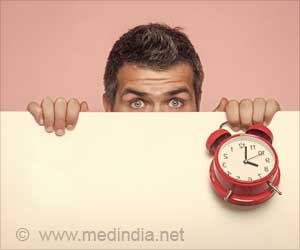 Using lab tests, the team demonstrated that the circadian rhythm is controlled by the stress hormone, corticosterone.


‘Our internal clock is controlled by some very unique hereditary genes, called clock genes. These genes are especially active in the suprachiasmatic nucleus area of the brain. ’

"In humans, the hormone is known as cortisol, and although the sleep rhythm in rats is the opposite of ours, we basically have the same hormonal system," said Associate Professor Martin Fredensborg Rath from the Department of Neuroscience.

In the study with the stress hormone corticosterone, the researchers removed the suprachiasmatic nucleus in a number of rats.

As expected, this removed the circadian rhythm of the animals.

However, the circadian rhythm of the cerebellum was restored when the rats were subsequently implanted with a special programmable micropump.

In this case, however, the researchers used the pump to emit doses of corticosterone at different times of the day and night, similar to the animals' natural rhythm.

"Nobody has used these pumps for anything like this before. So technically, we were onto something completely new," said Rath.

With the artificial corticosterone supplement, researchers were again able to read a rhythmic activity of clock genes in the animals.

"This is interesting from a scientific point of view because it means that we have two systems - the nervous system and the hormonal system - that communicate perfectly and influence one another, all in the course of a reasonably tight 24-hour program," Rath elaborated.

The researchers now plan to study other rhythmic hormones in a similar manner, including hormones from the thyroid gland.

Circadian rhythm (also known as sleep/wake cycle or the body clock) is a biological process that follows an internal cycle of roughly 24 hours.

Lack of sleep can affect the brain and reduce work performance. A new study explains how the brain is locally affected by internal time of day and sleep-wake cycles.

Brain has its own rhythm analogous to body rhythm or circadian rhythm. If your brain rhythm is in sync with the circadian rhythm you can be healthier, happier and feel more energetic.

With more than one billion people affected, diabesity is the largest epidemic in the world today. Fortunately it can be reversed with lifestyle changes.

Women get confused by the behavior of men in their lives. It is time they realize that men too have frequent mood swings.

Tired All The Time (TATT) syndrome is not only about feeling of tired, however there are a host of other symptoms. Diabetes and food intolerance trigger TATT.