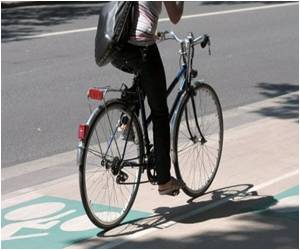 Researchers have confirmed what many cyclists in Toronto have long believed - that streetcar tracks are involved in nearly one-third of bicycle accidents.

A study published in the current issue of the American Journal of Public Health, found the greatest risk to cyclists occurs when they share major streets with parked cars and no bike lanes - like Dundas or King Streets - where there is a heightened risk of injury from moving cars and car doors opening.

However, 96 of the 690 crashes studied in downtown Toronto and Vancouver directly involved streetcar or train tracks. Eighty-seven of those accidents were in Toronto, accounting for 31.5 per cent of all bike accidents in the city that led to an injury that required a visit to an emergency department.


"Safety should be a primary consideration in decisions about how we design transportation systems in Toronto and this study has direct implications for a transportation strategy," said Dr. Michael Cusimano, a neurosurgeon at St. Michael's Hospital, who helped design, perform and report on the research.The lead author of the study was Kay Teschke, a professor in the University of British Columbia's School of Population and Public Health. "Thus far, safety has not been mentioned in the debate about the GTA's future transportation plans. Safety needs to be of at least equal or greater importance to other issues when we are making difficult decisions about transportation strategies."

Head injury or traumatic brain injury is a leading cause of disability among children and young adults that leads to varying degrees of physical and mental stability. Fortunately, it is also one of the preventable brain disorder.
Advertisement
The research project found that of the accidents involving tracks, 19 cyclists (19.8 per cent) said their tires slipped on the tracks and 77 (80.2 per cent) said their tires got caught in the tracks.Routes designed for cyclists - including bike lanes on major streets without parked cars, residential street bike routes, and off-street bike paths - carry about half the risk of being injured on a randomly selected point on their journey, the study found.

Cycle tracks -- physically separated bike lanes - have the lowest injury risk for cyclists, about one-ninth the risk.Dr. Glen Bandiera, head of the Emergency Department at St. Michael's, estimates that in the summer, four or five patients arrive in the ER every day after a bicycle incident.

The most common injuries are wrist fractures and shoulder dislocations from people using their arms to break their fall. St. Michael's was one of four hospitals in Toronto and Vancouver whose patients were tracked in the study.

The study also provided an interesting snapshot of who is being injured in all cycling accidents in the two cities: Most are men (59 percent), between the ages of 19 and 39 (62 per cent), who are regular cyclists (88 per cent) and completed post-secondary education (75 per cent).

Most were cycling to or from work or school (42 per cent) on a weekday (78 per cent) in daylight (77 per cent) and good weather (92.5 per cent). It found 68.3 per cent were wearing helmets, although that figure reflects the fact it's mandatory for adults to wear helmets in British Columbia, but not in Ontario.The single largest cause of bike accidents in the study was a collision with a motor vehicle (33.5 per cent).

Two preventable reasons why young pedestrians are struck by motor vehicles-poor guardian supervision and distraction because of mobile device use have been identified by trauma surgeons.
Advertisement
<< Positive Side Effect of Glaucoma Drug- A Promising Cure For...
Less Sensitive Taste Buds Make Obese Children To Overeat >>