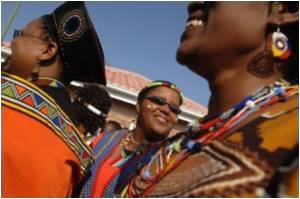 The tradition of gender equality in Sweden has famously put more mums in the workplace while rising numbers of dads stay at home.

Now advocates have a new frontier: they're pushing for a gender-neutral pronoun, "hen", to be added to "han" (he) and "hon" (she).

Gender equality has been advocated by the UN's Food and Agriculture Organisation (FAO) in agriculture in order to increase farm production and reduce the world's hungry by at least 100 million.
Advertisement

"There's almost nothing left to do in the field of gender equality, so people are suggesting increasingly strange ideas," said independent journalist Elise Claesson, partly amused and partly irritated by the debate.


The word "hen" was coined in the 1960s when the ubiquitous use of "han" (he) became politically incorrect. It was about "simplifying the language" and avoiding the clumsy "han/hon" (s/he) construction, said linguist Karin Milles.

A survey serves as an eye-opener to Australia as to how much it lags behind developed countries in matters relating to gender equality.
Advertisement
But the word never really took off.

It resurfaced around 2000, when the country's small transgender community latched onto it.

Then the publication this year of a children's book reignited the debate over the pronoun.

Author Jesper Lundqvist said he wanted his book to address children in general, not little boys or little girls.

"Hen" is not meant to replace "he" and "she", supporters argue. Instead, it allows speakers to refer to a person without having to mention the gender if they don't know it, if the person is transgender, or if the information is considered irrelevant.

However, she said: "But we have to keep 'he' and 'she' because these are categories that everyone uses to orient themselves. We want to know if a person is a man or a woman."

According to Milles, "hen" is a tool that "works to spread the idea of gender equality."

Another linguist, Mikael Parkvall, is less convinced, however.

"The notion that language determines our way of thinking is very popular, but those of us who are specialists are pretty sceptical," he said.

"The link between language and thought is not very strong, and you don't become more gender equal by using a neutral pronoun," he added, citing Mandarin, the language of male-dominated China, as an example of a language that has such a pronoun.

It's difficult to predict whether "hen" will gain a large following in the Scandinavian country.

Sven-Goeran Malmgren, editor of the Swedish Academy's authoritative dictionary, said he doesn't know of "a single example in the world where a pronoun that has been invented has taken hold."

Whether "hen" will be included in the next edition of the dictionary in 2015 will depend on how widespread it becomes, Malmgren said.

For the moment, "hen" seems to be more of a fad.

"It's a project for the (intellectual) elite," Claesson said.

"A study conducted online by the Aftonbladet tabloid showed that 96 percent of people who took part don't use 'hen'," she said.

A small group "think that they can create an egalitarian society by manipulating different things. ... It gets a little exaggerated," she added.

Some Swedes say they've never even heard of the word.

But the pronoun has taken a step onto the political stage: the Green Party, the country's third largest political formation, used only the "hen" pronoun in its party programme published in September.

"It was natural for us to use gender-neutral language," said party secretary Anders Wallner.

"It's a modern way of writing in texts where you don't need to specify gender, which happens quite a lot," he said.

Wallner said he believes "hen" will soon be as free of controversy as the 1970s decision to abolish the plural form for addressing strangers and instead use the more informal singular.

Swedish Gender Equality Minister Nyamko Sabuni, contacted by AFP, had no comment on the "hen" debate.

World's first mother to daughter uterine transplants were performed in Sweden.
Advertisement
<< Sleeping Brain Behaves As If It's Remembering Something
Belize: A Paradise for Tourists and Drug Traffickers >>