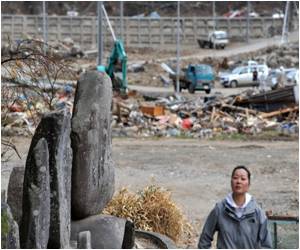 Deadly tsunami warnings carved in an ancient stone in Japan. One of the monuments on a wooded hillside marks the limit of the tiny village of Aneyoshi, whose residents now credit it with saving them on March 11 when a giant ocean wave smashed into the fishing cove below them.

"A house on high ground will lead to peace and happiness for posterity," reads the inscription on the stone, which was erected after a massive tsunami in 1933 killed thousands along the rugged Pacific coast.

Yuki Kikuchi thought his dream of playing baseball was gone as he saw his hometown destroyed by the tsunami which devastated northeastern Japan on March 11.
Advertisement

"Remember the calamity of the great tsunami. Never build houses from this point down.... No matter how many years pass, keep vigilance high," says the ominous warning carved into the one-metre (three-foot) tall stone.


Before the 1933 disaster struck in the Japanese year of Showa 8, the small coastal community had also been obliterated in Meiji 29 (1896). The first tsunami left just two survivors, and the second only four.

A lone pine tree stands on the shore of a tsunami-wrecked Japanese city, a symbol of hope and defiance for people who have lost everything.
Advertisement
After the Showa disaster, Aneyoshi was rebuilt on higher ground, above where the stone now stands, and the villagers, who have traditionally made a living by growing seaweed and bearded clams, have stayed there ever since.

Both past tsunamis were triggered by offshore quakes stronger than magnitude 8.0 -- massive tremors, but still smaller than the magnitude 9.0 quake that struck below the seabed just over eight weeks ago.

The latest tectonic disaster sent water racing to a height of almost 39 metres here (130 feet) -- the highest level ever recorded in Japan, according to a university study -- as water was funnelled up between steep cliffsides.

While the population pressures of modern Japan make it inevitable that millions live in exposed coastal areas, the village of just 11 households has been able to follow the warnings from the past.

"To follow such a rule and live together like this is probably only possible in a small-size community," said Kei Maekawa, 40, whose family comes from the Iwate prefecture village.

Elsewhere along the shattered coast, however, the wave reached unimagined heights that ripped away the old stone markers.

Isao Sasaki, 73, from Otsuchi, also in Iwate prefecture, said two stone monuments marking the 1896 and 1933 tsunamis used to stand outside his Japanese-style ryotei restaurant, now a pile of rubble.

"They were both as tall as myself," said Sasaki, who is about 1.7 metres (five feet seven inches) tall, looking sadly at the debris.

"On the one from the Meiji tsunami, a poem was engraved in the rock, warning that we must run immediately after a quake."

"Since childhood, we have been told horrifying stories about how people tried to survive tsunamis by tying themselves to wooden pillars with kimono obi belts. Dead bodies then piled up in a pond near here."

Sasaki's sister Setsuko Koyama, 63, said that every time an earthquake hit, they would run outside to check the water inside a nearby well, because a falling water level is a precursor to a tsunami.

Despite the oral traditions and ancient wisdom, the fishing town of Otsuchi still lost more than 10 percent of its 15,000 people.

"We all knew how horrifying a tsunami is," said Sasaki. "But we still didn't think such a huge tsunami would come.

"People who tried to help the elderly or look for their children were the ones who ran away late and got killed."

Even the tiny Aneyoshi community, where the hillside houses remain standing above the now calm sea, was not spared tragedy.

On the day of the calamity, a mother in her mid-30s rushed to pick up her three children from school and drive them to safety, following a seaside route -- only for all of them to be swept away by the giant wave.

"The stone is becoming widely known as what saved our community from the tremendous tsunami, but there is a bright side and a dark side to it," said Maekawa, the brother-in-law of the dead woman.

"We lost four out of about 30 people. We cannot be that happy to talk about the wisdom from the stone."

Hundreds of family pets are struggling to survive in the desolation of Japan's tsunami-ravaged northeast coast even as their owners are either lost or dead.
Advertisement
<< Stress in Pregnancy Could Lead to 'Unruly, Hot-Tempered Kid...
FluPhone App to Track Infectious Diseases >>