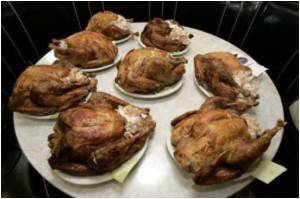 The EU may move to strengthen controls on imports of Japanese food to include checks on the presence of plutonium.

"The European Union will look at this question" at experts level, said European Commission spokesman on health issues Frederic Vincent. "We will take plutonium contamination into account."


But the detection of plutonium in soil this week at the stricken Fukushima nuclear plant has sparked new fears.

"The situation is serious but surveillance is under way and if there is a need to broaden the controls, the EU will do that," the spokesman added.

Soy or Soya is a crop which has been cultivated from thousands of years. It belongs to the family of legumes.
Advertisement
The Commission, the 27-nation bloc's executive arm, imposed emergency tests on imports of Japanese food and feed a week ago originating in or consigned from areas "most affected by the accident" at the Fukushima Daiichi plant.

Deliveries must come "accompanied by a declaration, to be provided by the Japanese authorities, attesting that the product does not contain levels of radionuclides that exceed the EU's maximum permitted levels."

Radioactive elements listed under the special regulation are: iodine-131, caesium-134 and caesium-137.

Importers will be required to notify national authorities two days before landings and physical checks in labs "will be carried out on at least 10 percent of the consignments."

The EU commission says Japan may export to the EU fishery products, bivalve molluscs (seafood), casings and pet food as well as fruits and vegetables.

Imports to the EU of Japanese agricultural products were worth just over 200 million euros in 2010.

Accident and Trauma Care Iron Intake Calculator Pregnancy Confirmation Calculator Find a Doctor The Essence of Yoga Indian Medical Journals Noscaphene (Noscapine) A-Z Drug Brands in India Blood Donation - Recipients Vent Forte (Theophylline)
This site uses cookies to deliver our services. By using our site, you acknowledge that you have read and understand our Cookie Policy, Privacy Policy, and our Terms of Use