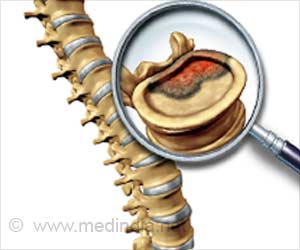 Cancer spreads from one part of the body to another, making it difficult to treat. A new study has found a method to inhibit the spread of cancer.

Researchers from Case Western Reserve University School of Medicine and six other institutions relied on a new model of how cancer metastasizes that emphasizes epigenetics, which examines how genes are turned on and off.

Advertisement
‘Targeting the inhibition of genes which can cause alterations can help block tumor cells that spread cancer.’

The investigators including scientists from the National Cancer Institute and Cleveland Clinic used innovative epigenetic-centered techniques to halt the spread of bone cancer (osteosarcoma) cells to the lungs in mice. The large majority of deaths associated with osteosarcoma are due to the spreading of the cancer to the lungs, a process known as metastasis.


Most human osteosarcoma cases occur in children and young adults between the ages of 10 and 30, with teens the most frequently affected age group. Clinical outcomes for patients with osteosarcoma have not improved for more than 30 years and there are currently no approved targeted anti-metastatic therapies for the disease in wide clinical use.
Advertisement
"More than 90 percent of all cancer deaths are the result of tumor metastasis, not primary-site tumors," said the study's senior author, Peter Scacheri, PhD, professor of genetics and genome sciences at Case Western Reserve University School of Medicine and member of the Case Comprehensive Cancer Center.

"While many of the genes responsible for metastasis have been identified, the mechanisms that control these genes are not well defined. Our findings demonstrate that altered gene-enhancer activity is fundamental to a cancer cell's ability to metastasize."

Gene enhancers are short segments of DNA that, when bound by specialized proteins called transcription factors, function like switches to activate genes. This process is critical for normal development, as when a single fertilized egg develops into the many different cell types which comprise the body.

There are tens of thousands of gene enhancers in each cell, far more than the number of genes; they will be in different "on" and "off" positions in, for example, eye and heart cells, (or gradients thereof, like a dimmer switch's effects on the brightness-level of a light). These distinctive "on and off" profiles lend cells their unique characteristics, even though they all have the same DNA.

But faulty enhancer regulation appears to contribute to tumor-formation and subsequent spreading of cancer cells. In addition, different cancers are distinguishable by different enhancer patterns. In this new study, the authors show that the on-off switches of cancer cells that have metastasized are in different positions than in the cells of the source tumor.

"Metastasis results from a complex set of traits acquired by tumor cells, distinct from those necessary for tumors to form in the first place," said the study's lead author, James J. Morrow, PhD, a medical student in the Medical Scientist Training Program at Case Western Reserve University School of Medicine.

"Unfortunately, searching for gene mutations that drive metastasis has not substantially improved outcomes for patients with metastatic disease. Five-year survival rates for cancer patients with regional or localized disease have significantly improved for many types of cancer. But with few exceptions, outcomes for patients with metastatic cancer have remained stagnant. It is well established that primary tumor formation is driven by a combination of genetic and epigenetic events. So based on the knowledge that enhancers drive both normal cell development and tumor-formation, we hypothesized that they may play a similar role in the transition of cancer cells from one developmentally distinct tissue to another during metastatic progression."

Through epigenomic profiling experiments, the Case Western Reserve-led researchers consistently identified certain bunched clusters of enhancers - known as metastatic variant enhancer loci (Met-VELs) - near cancer genes in lung metastases of patients with osteosarcoma, indicating that they were central to the metastatic process.

Using experimental mouse models, the researchers then showed that growth of osteosarcoma cells in the lung can be mitigated by using BET inhibitors (anti-cancer drugs currently in clinical trials), which broadly interrupt the function of Met-VELs in driving gene expression.

Second, they demonstrated that the metastatic capacity of osteosarcoma cells can be diminished by blocking expression of individual genes regulated by Met-VELs or the transcription factors driving that regulation. They verified that a particular Met-VEL-linked gene, Tissue Factor (F3), is essential for metastatic colonization. Specifically, interrupting the signaling and pro-coagulant (blood clotting) functions of F3 with antibodies inhibiting these functions was sufficient to prevent metastasis.

Additionally, they showed that deleting a single Met-VEL regulating F3 expression via the TALEN gene-editing process achieved a similar effect. "Our experiments show that removing a single enhancer of the F3 gene in tumor cells virtually eliminates their ability to metastasize in mice," said Scacheri.

"Collectively, our findings establish that enhancer elements endow tumor cells with metastatic capacity and that targeted inhibition of genes associated with enhancer alterations, or deleting altered enhancers themselves is sufficient to block metastatic colonization and proliferation. While our work focused on lung metastasis in osteosarcoma, the findings have implications for other types of metastatic cancer as well."

The Case Western Reserve University School of Medicine focus on epigenetics in the new study represents a break with the prevailing model for metastasis, which largely explores mutations in the genes - not if or how certain genes are turned on or off.

And the preponderance of current cancer research takes place on the early stages of disease, such as how tumors are formed and on what distinguishes cancer cells from normal cells, and not on metastasis. Additionally, most cancer medications and treatments today were developed to kill primary tumors, not cancer cells that have spread elsewhere.