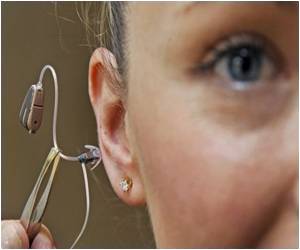 A ground-breaking trial to test the use of umbilical cord blood transplants to treat hearing loss in infants has begun in US.

The phase I trial follows promising studies on mice showing that such transplants were able to rebuild the structures of the inner ear, and some anecdotal evidence from humans, sparking hope of a cure for some forms of deafness.

One of those people is two-year-old Finn McGrath, who suffered brain damage after being deprived of oxygen during a prolonged and complicated delivery, according to his mother, Laura.


"His doctors told us he was at high risk for cerebral palsy, vision issues, hearing problems and mental retardation," she said in an interview with AFP.
Advertisement
Finn's early days were an all-out struggle to survive, so for his parents, learning that he had failed his hearing tests and had damaged hair cells -- the sensory receptors in the inner ear that pick up sounds -- was almost an afterthought.

He had organ failure, breathing problems, and his cerebral palsy left him unable to roll, crawl or walk, hold his head up, talk or eat.

As his parents searched for ways to help him, they came upon stories online that told of studies using cord blood to help children with cerebral palsy and other disorders.

Prior to his birth, the McGraths had arranged to privately bank his umbilical cord blood, a procedure that costs around $2,000 plus storage fees, and remains controversial among pediatricians.

Private companies such as the Cord Blood Registry, which is funding the Texas study on hearing loss, urge expecting parents to bank their umbilical cord blood and reserve it for personal use as a way to protect their family.

That advice runs counter to the guidelines issues by the American Academy of Pediatrics in 2007, which calls such claims "unsubstantiated" and says banking for personal or family use "should be discouraged" but is "encouraged" if it is to be stored in a bank for public use.

Since Finn's parents had already banked his, they enrolled him in cord blood trial for cerebral palsy in North Carolina and he received his first transplant in November 2009 when he was about seven weeks old.

A second transfusion followed and by May, his parents began to notice a change.

Night-time noises, like an alarm on his food pump or the sound of ripping medical tape, would suddenly startle him awake, his mother recalled.

"He started vocalizing sounds and we could tell that he was anticipating things that we would say. Like, if he had heard a story a number of times or a song, he would smile like he recognized the song or the story."

Finn had a third infusion in September 2010, when he was one year old. Four months later, an otoacoustic emissions test (OAE), which plays a sound and picks up vibrations in the cochlea and hair cells, came back normal.

The early hearing tests that showed hearing loss were not exactly the same as the later tests that came back normal, so McGrath is cautious about comparing them directly, but she believes the cord blood transfusions may have helped.

"All I can tell you is anecdotally he was not able to hear for probably the first three or four months of his life, and then when he was about six to eight months old, he started hearing."

The hearing trial in Texas aims to take a first step in testing the safety, and later the efficacy, of transfusing cord blood in children age six weeks to 18 months who have sustained post-birth sensorineural hearing loss.

Some reasons that children lose their hearing at or after birth may include oxygen deprivation, head injury, infection, strong doses of antibiotics or loud noises.

Sensorineural hearing loss affects approximately six per 1,000 children, and there is no available medical treatment. Hearing aids or cochlear implants are typically offered to boost the ability of the damaged tissues.

"We are at the initial stages of this process and the results are looking promising," Fakhri added.

The new study at Memorial Hermann-Texas Medical Center is being funded by the Cord Blood Registry, a private bank, and those eligible must have already banked their own umbilical cord blood with CBR.

But to Stephen Epstein, an otolaryngologist in Maryland, that does not pose a conflict of interest, because separate medical institutions in Texas and Georgia are conducting the Food and Drug Administration-approved research.

"If both of them can reproduce the same results then I would say it has some validity to it," said Epstein, who is not involved in the study.

"This is certainly a welcome, acceptable experiment, but it should be looked at with caution and time will tell."

One patient is already enrolled and the study, which runs for one year, has room for nine more.

While Finn McGrath still faces many challenges due to his cerebral palsy, his mother is grateful for the things he can do.

"I don't know how much worse off he would have been without the stem cell transfusion," McGrath said, pointing to his normal cognition, lack of seizures, good hearing and vision.

"We remain hopeful that he will continue to improve."

Anatomy of Ear and Hearing - Animation
Ear converts sound waves into electrical impulses that are transmitted to the temporal lobe of the ....

Diabetic Women At Higher Risk of Hearing Loss
Women with diabetes are at an increased risk of suffering from age-related hearing loss....