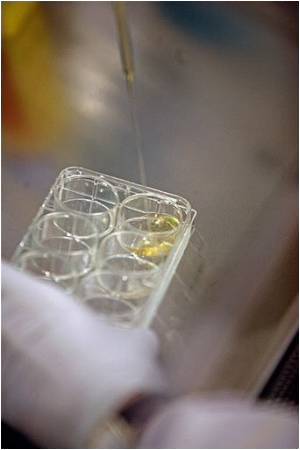 Excess production of EZH2, an essential protein for normal stem cell renewal promotes the growth of breast cancer cells,pointed out in a study.

In mouse and lab experiments, the team also discovered that two drugs block the cascade of molecular events that they describe in the paper, thwarting formation of breast tumor-initiating cells.


The molecular chain of events that improves self-renewal, survival and growth of these breast cancer stem cells can be initiated by oxygen-starved portions of a tumor, Hung Ph.D., professor and chair of MD Anderson's Department of Molecular and Cellular Oncology said. This hypoxia stimulates a protein that in turn causes overexpression of EZH2.

Breast cancer is one of the leading causes of cancer deaths among women. It is often said that a woman who breast-feeds is at a lower risk of developing cancer compared to another who does not .Are these mere old wives tales or is there some truth in it? This quiz on breast cancer has all the details.
Advertisement
Abundant EZH2, the team showed, dampens production of an important protein involved in DNA damage repair. Unrepaired chromosomal damage then amplifies production of RAF1, which unleashes a molecular cascade that promotes expansion of breast tumor-initiating cells and cancer progression.

The team tested five anti-cancer drugs against a culture of breast cancer cells and in tumor samples of human breast cancer in a mouse model. Sorafenib, a RAF inhibitor also known as Nexavar, eliminated more cancer stem cells and blocked tumor formation better than the other four.

"The drugs' inhibition of the breast tumor-initiating cells reveals a previously unidentified therapeutic effect for RAF1-ERK inhibitors to prevent breast cancer progression," Hung said. AZD6244 is being tested in multiple clinical trials, he noted, and it will be interesting to see whether the cancer-stem-cell-killing ability will be induced in those trials.

Hunting down a dangerous pathway

Breast cancer stem cells can be sorted from other primary cancer cells by the presence of the surface protein CD44 and low or absent CD24 in tumor cells.

The researchers found that high expression of EZH2 in breast cancer stem cells reduced the levels of the tumor suppressor RAD1 and correlated with high-grade tumors in a sample of 168 human breast cancer tumors. It also increased the number of tumor-initiating cells in culture.

EZH2 also is heavily expressed, and RAD1 diminished, by lack of oxygen in the tumor's environment, which causes activation of the HIF1a(alpha) protein. HIF1a(alpha), the researchers found, activates the EZH2 gene by binding to the gene's promoter region.

In December, Hung and colleagues published a paper in Nature Cell Biology showing that the enzyme CDK1 shuts down EZH2.