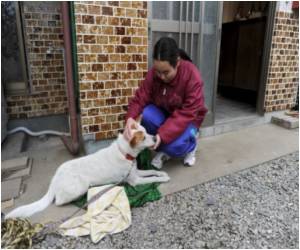 After the Japan's tsunami, many people lost their loved ones and have become orphans. Uncertain future is faced by these Japan's tsunami orphans. Naho Tsuchiya's parents won't be there to wish her luck when she starts high school next week. She and her little brother are now orphans, left to fend for themselves by Japan's tsunami.

"There were four of us in the family. My mother, father, little brother and me," she said.

Until two weeks ago, the beach resort of Okumatsushima was a thriving stop on the Japanese tourist trail when a huge tsunami virtually wiped it from the map.
Advertisement

"On the day of the tsunami Takashi was at the school with me, so he was safe. My parents took shelter in the sports hall. But that was washed away."


Naho, 15, and Takashi, 13, are just two of an unknown number of children orphaned by the huge waves that crushed towns along Japan's northeast coast on March 11. Hundreds, perhaps thousands of others lost one parent.

Media reports indicate that shops and restaurants in sushi-mad Hong Kong, one of Japan's key food export markets, have been hit badly by the radiation scare.
Advertisement
Nationally, more than 25,000 people are dead or missing two weeks on from Japan's worst natural disaster in nearly a century.

Naho knows for sure that her parents are gone.

With their house smashed to kindling and their possessions scattered around what was once the small city of Rikuzentakata, their dog Chakko is all that links the two children to life before the tsunami.

The pet was driven to safety by the children's father before he turned back to the city to try to join his wife in a sports centre where they thought they would be safe.

But Rikuzentakata's tsunami defences were overwhelmed by the size and ferocity of the wave, which left around 2,300 people -- 10 percent of the town's population -- dead or missing.

After the tsunami, Naho and Takahashi spent a cold, frightened night on the floor of their school along with hundreds of others evacuated from their homes.

It was there that the young girl's dance teacher spotted them and took them to her home, which sits on higher ground.

"I used to teach their father dancing as well, so I have known them since they were little," said Shimizu Kiwako. "When I saw them at the school I thought it was awful, so I brought them here."

The 74-year-old says she will take care of the children as long as necessary.

"It's very sad for them and I worry about them," she said. "They're staying here so I try to look after them. I make them eat. But they are good children and they are trying to be cheerful.

"Their aunt lives in Tokyo and we haven't spoken yet about what will happen to them in the long run, but when she comes back we will talk."

Rikuzentakata city mayor Futoshi Toba said his staff were working hard to try to identify and cater for children whose parents were killed.

"We know more than 50 children have lost one or other of their parents," he said.

"As far as we know at the moment, three or four children lost both of their parents."

The government admits it does not know how many children were orphaned around the country by the tsunami that followed the 9.0 magnitude quake.

The Welfare Ministry said this week it was establishing a working group to try to find out the scale of the task, Kyodo News reported.

The ministry estimates that more than 100 children became orphans in the earthquake that levelled Kobe in 1995, but "the latest disaster has caused wide-scale damage and we are concerned that a greater number of children have lost their parents," an official said.

The wiping out of infrastructure and local government was complicating the task, he said, adding that the ministry was hoping to mobilise 400 experts to find nursing homes or foster parents for tsunami orphans.

For Naho, March should have been an exciting month.

She finished junior high school and was looking forward to the graduation ceremony that would mark her passage into the more grown up world of high school.

She says she is excited by the prospect of life at a larger school, but admits to being a little nervous and knows her future now rests on the kindness of relatives and neighbours.

"The people around here have really helped me," she said. "They are very kind."

She talks vaguely of going to university, but speaks also of wanting to remain in Rikuzentakata when -- if -- it is rebuilt.

"I have lived here since I was small. I want to stay, but I will live wherever I can."

Asked what she thinks will happen in the future, she pauses for a long time, before saying quietly: "I just want to do my best."

Japan radiation scare spreads to tap water. Parents in Japan are really frightened by the tap water scare and are opting for bottled water from Tokyo's Bunkyo ward.
Advertisement
<< Poor Diet in Postmenopausal Women Increases Their Risk of A...
Simple Eye Test to Predict Amputation Risk in Diabetics >>

Hearing Loss Calculator The Essence of Yoga Post-Nasal Drip How to Reduce School Bag Weight - Simple Tips Blood - Sugar Chart Indian Medical Journals Sanatogen Color Blindness Calculator Blood Pressure Calculator Pregnancy Confirmation Calculator
This site uses cookies to deliver our services. By using our site, you acknowledge that you have read and understand our Cookie Policy, Privacy Policy, and our Terms of Use