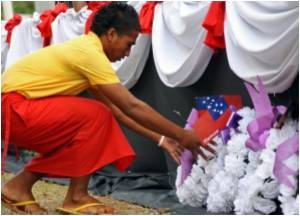 Ten days after the tsunami disaster, towns away from the impact zone are experiencing shortages of basic necessities. Gas station queues stretching for several kilometres, long waits at supermarkets, empty store shelves and shuttered businesses have become a part of the landscape.

At the foot of the Mount Iwate volcano, the people of Morioka city -- almost 100 kilometres (60 miles) west of the devastated coast -- are still trying to adjust to the sudden absence of many things they had simply taken for granted.

A new report says that the horror of Japan's tsunami has raised concerns over the long-term impact on children, some of whom are already displaying signs of trauma.
Advertisement

At a gas station on the outskirts of the city, motorists waited hours on end before finally reaching the gas pump, clutching a 2,000 yen ($25, 17 euros) daily rationing coupon in their hands. The coupon is barely enough to buy a third of a tank on an average-sized city car.


One man wasted so much gas queuing up that his car ran dry and needed several people to push it up to the station.

Kabuya Kubo said she had waited for nearly six hours to put gas in her tank. Ever since the tsunami, she has had to bike to work whenever the car runs low on fuel -- a one-hour trip, versus 15 minutes by car.

Japan, whose people have been widely applauded for their discipline in the face of appalling adversity, is facing a stern test as isolated reports of looting by desperate tsunami survivors
Advertisement
"Now, again, I realize that electricity, gas, all of that is really important," she said. "Because there's no gas, I can't go anywhere that's far away. It's difficult."

Most gas stations have been cordoned off or closed for the better part of the day due to disruptions in the supply system caused by the March 11 earthquake and ensuing tsunami that devastated Japan's northeastern coastline.

"There are no more meat and vegetables. I'm eating instant meals all the time," said Naohiko Seki. "I would like to regain my old life, but when I think about people who suffered from the tsunami, I tell myself I shouldn't complain."

A ramen noodle restaurant on the main shopping street downtown only offered a single type of plain fried rice for sale. There were no customers in sight at 2:00 pm and the usually busy room stood empty.

"Ever since the disaster, our suppliers haven't been able to reach us. We haven't been getting many customers recently," said cook Toshiyo Sasaki.

"Our restaurant is usually open 24/7 but now we can't stay open all the time. We have reduced working hours because we can't get the products we need."

As fresh produce grows scarcer, restaurants are serving more prepared foods and noodle- or rice-based dishes than ever before.

Convenience stores, usually open around the clock, had row after row of empty shelves, where prepared foods like the normally ubiquitous 'onigiri' rice balls, water and milk products once stood.

Popular French bakery Pompadour opened at 1:00 pm and had sold out its entire stock of bread and pastries in two hours.

Outside a shopping mall, a handful of school students held up signs about the tsunami disaster and asked customers for donations to buy food and clothes for the victims.

A group of green-clad boy and girl scouts on the main shopping street also urged passersby to donate -- and many did, even encouraging their young children to drop a few coins in the box.

Yoshii Sato said he was a "little afraid" for his very young daughter.

"It's really strange. The stores have almost no baby food and other items. It makes me uneasy and anxious. I am worried because I don't know whether or not I will be able to buy what my child needs," he said.

Still, Sato stressed that others had to cope with much worse.

"In Morioka, we are getting by okay, but toward the coast, many more people have lost their homes and are forced to suffer. We feel very sad for them."

Spinach and milk found to have been contaminated with radiation in Japan are safe to eat and drink, says the World Health Organization.
Advertisement
<< Luxury Ads Banned in Beijing
Spirit of Standing Together >>

Pregnancy Confirmation Calculator Blood Pressure Calculator Drug - Food Interactions Post-Nasal Drip How to Reduce School Bag Weight - Simple Tips Drug Side Effects Calculator Blood - Sugar Chart Find a Doctor Calculate Ideal Weight for Infants Hearing Loss Calculator
This site uses cookies to deliver our services.By using our site, you acknowledge that you have read and understand our Cookie Policy, Privacy Policy, and our Terms of Use  Ok, Got it. Close
×