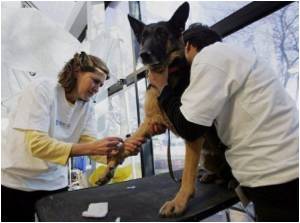 It is clear that the root causes of diseases such as type-2 diabetes and obesity have been difficult to identify because the diseases are complex.

They occur at the dicey biological intersection of genes and environment, and, because they arose in our relatively recent past, it's not easy to simply compare DNA sequences from "then" and "now" to pinpoint likely genetic culprits.

Now researchers at the Stanford University School of Medicine have identified genetic variations in a hormone involved in the secretion of insulin  a molecule that regulates blood sugar levels  that occur more frequently in some human populations than others. People with the "new" variants, which are thought to have first occurred 2,000 to 12,000 years ago, have higher fasting levels of blood glucose than those with the more traditional, or ancestral, form of the gene. High blood glucose levels are associated with the development of diabetes, which occurs when the body is unable to produce or respond properly to insulin.


The finding may help scientists better understand the subtle changes in human metabolism, or "energy balance regulation," that occurred as our species shifted from being primarily hunter-gatherers to a more agriculturally based society. It may also help clinicians identify individuals likely to develop diabetes, and direct the development of new therapies for diabetes and obesity.

Valuable information on diabetic foot care, treatment and prevention.
Advertisement
"These studies are fascinating because it shows how much the selection process has affected human energy-balance regulation in just a few thousand years and how complex it could be for the future practice of personalized medicine," said Sheau Yu "Teddy" Hsu, PhD, assistant professor of obstetrics and gynecology and senior author of the study.

The research will be published online Feb. 7 in Diabetes. It follows a similar paper in the January issue of Genome Research that also explored the recent evolution of energy balance regulation, or how humans choose whether and how to store excess calories, among populations.

In the new paper, Hsu and his colleagues at Chang Gung Memorial Hospital in Taiwan and Texas A&M University first identified 207 genetic regions that have been associated with diabetes or obesity. They then looked to see which of these had increased in prevalence in the time since humans began to move out of Africa about 60,000 years ago. They identified 59 genetic regions of particular interest, and homed in on those that occurred in at least 30 percent of people in the HapMap project  a worldwide survey of genetic differences among populations. (Restricting their search to relatively common variants ensured that their findings would be widely applicable and would provide a more powerful tool to identify any associated phenotype differences.)

The researchers identified five genes with genetic differences that occurred frequently in Asians and/or Europeans, but infrequently in Africans. (These groups were pre-identified as part of the HapMap project, which sampled people of Nigerian, Chinese, Japanese and European ancestry.) Hsu's team selected GIP, one of the five genes, for further study because the GIP protein was known to be involved in stimulating insulin secretion in humans after a meal.

"We thought GIP was the most interesting because the newly selected form occurs in about 50 percent of people from Europe or Asia, but in only about 5 percent of Africans. That indicates this gene is highly adaptable to new environments," said Hsu.

He and his colleagues identified three individual changes in the regulatory region of GIP  that is, the DNA adjacent to the GIP gene that affects when and how it is translated into protein  that reduced the levels of the hormone. What's more, these three also tended to occur with another mutation in the coding region that results in a slightly different form of the protein. This alternate form is degraded more slowly in human blood.

"So now we know there are two different forms of the protein, which allowed one form to be selected in one population, and the other in a different population," said Hsu. "But we still needed to show that these variants led to phenotypic differences in modern humans."

Because previous studies of GIP variants hadn't showed any conclusive differences among their human carriers, Hsu and his colleagues focused their study more narrowly on a population that is not only metabolically challenged, but also critical to evolutionary success: pregnant women. They found that, out of 123 East Asian pregnant women, those who carried two copies of the newly evolved variant had significantly lower levels of GIP circulating in their blood. These women were also at a significantly increased risk to have fasting blood glucose levels that exceeded the recommended threshold of 140 mg/dL (48.3 percent vs. 20.9 percent of those who carry the ancestral variant).

The finding is particularly interesting because it may help clinicians identify pregnant women likely to develop gestational diabetes, according to Hsu. But it also gives a glimpse into our not-so-distant past and the ways our ancestors grappled with environmental change.

"Like other humans at the time, the Eurasian population really had to fight for survival," said Hsu. "Now we're starting to pinpoint how they did that on a molecular level. These gene variants, and the resulting higher blood sugar levels it fostered, may have helped women maintain successful pregnancies in the face of the inevitable famines that occur in an agriculturally based society. Now, in a more food-secure environment, variations in GIP could contribute to the development of diabetes or obesity."