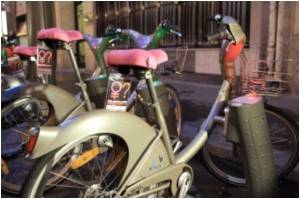 British cyclist Sir Chris Hoy, relishes up to 6,000 calories a day, beginning with a breakfast of cereal, banana and honey, a fruit smoothie, orange juice, a protein shake and a coffee. He has won three gold medals at the Beijing Olympic Games in 2008.

Hoy also drinks up to six litres of water a day, and trains for 25 to 35 hours a week.

A typical day for Hoy might include two hours in the gym, a one-hour recovery ride on the road, then three hours at the velodrome.


One of his gym exercises involves him pushing weights of 35 stones, which is two-and-a-half times his body weight with his legs.

Hoy has also been nicknamed Golden Thighs because of his 27in legs, and he hopes that might hopefully power him to yet another gold during the London Olympics.

To avoid obesity we must consciously control the quantity and the quality of fat that we eat and our daily intake of fat should contribute no more than 25% of our calories.
Advertisement
<< Risk of Cancer from Heartburn Pills
Management And Treatment Of Barrett's Dysplasia And Adenocar... >>