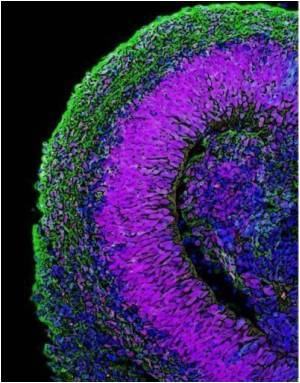 A spinal mass was identified in a patient with complete spinal cord injury 8 years after she had undergone implantation of olfactory mucosal cells in the hopes of regaining sensory and motor function.

The case is reported and discussed in "Autograft-derived spinal cord mass following olfactory mucosal cell transplantation in a young woman with spinal cord injury. Case report," by Brian J. Dlouhy, MD, Olatilewa Awe, MD, Rajesh C. Rao, MD, Patricia A. Kirby, MD, and Patrick W. Hitchon, MD, published online, ahead of print, in the Journal of Neurosurgery: Spine. The authors state that this is the first report of a spinal cord mass arising from spinal cord cell transplantation and neural stem cell therapy, and they caution that physicians should be vigilant in their follow-up of patients who undergo stem cell interventions.

For the first time, researchers have shown in an animal more closely related to humans that it is possible to make a new bone from stem-cell-like induced pluripotent stem cells
Advertisement

In its natural state, the olfactory mucosa lines the roof of the nasal cavity, adjacent to the respiratory mucosa that lines the lower nasal cavity. In addition to smell receptor neurons, the olfactory mucosa contains progenitor cells (also known as adult stem cells) and olfactory ensheathing cellsboth of which have been shown to aid in the repair of the injured spinal cord in laboratory studies and in humans. The respiratory mucosa, on the other hand contains mucus-secreting goblet cells and mucus and serous fluid¬-producing cells.


The patient was 18 years old when she sustained a fracture dislocation at the 10th and 11th thoracic vertebral level in a motor vehicle accident. Despite surgery to stabilize the spine, the injury rendered the patient paraplegic. Three years later, in the hopes of regaining sensory and motor function in her lower limbs, the young woman underwent additional surgery at an institution outside the United States, during which an autograft of olfactory mucosa was placed in her spinal canal at the site of injury.

Stem Cell Therapy for Heart Failures Gets a Boost

Human embryonic stem cells which are grown from muscle cells boosted damaged monkey hearts in lab experiments says a study which holds promise for therapies to replace tissues in heart
Advertisement
Eight years after the experimental therapy, the woman sought medical care for mid- to lower-back pain at the University of Iowa Hospitals and Clinics. On neurological examination, she showed no sign of clinical improvement from the olfactory mucosal cell implantation, and imaging studies revealed a mass in her spinal canal pressing against the spinal cord. This mass was the source of the patient's pain.

Following surgery to remove the symptom-producing mass at the University of Iowa, a tissue analysis showed that the mass contained a small proportion of nonfunctional tiny nerve branches, whose appearance led the authors to suspect the nerve branches developed from transplanted neural stem-like cells. The tissue analysis also demonstrated that most of the mass consisted of multiple cysts lined with respiratory mucosa and underlying submucosal glands and goblet cells. Abundant mucus-like material was also found in the mass. Accumulation of this material over time produced the patient's symptoms.

The authors point out that a rare case of spinal cord complication such as this should not discourage stem cell research and/or the transition of promising research to the clinical setting. However, the authors indicate the need for a better understanding of what can occur and urge clinicians to extend the monitoring period in patients treated with neural stem cell therapy for many years in case an adverse event such as this should arise. In summarizing the take-away message of the paper, Dr. Brian Dlouhy stated: "Exhaustive research on how transplanted cells divide, differentiate, and organize in animal models of disease, especially spinal cord injury, is critical to providing safe and effective treatments in humans."

Stem Cell Therapy may be Helpful for MS Patients

Iron Intake Calculator How to Reduce School Bag Weight - Simple Tips Daily Calorie Requirements Drug Side Effects Calculator Find a Hospital Color Blindness Calculator Accident and Trauma Care A-Z Drug Brands in India Turmeric Powder - Health Benefits, Uses & Side Effects The Essence of Yoga
This site uses cookies to deliver our services.By using our site, you acknowledge that you have read and understand our Cookie Policy, Privacy Policy, and our Terms of Use  Ok, Got it. Close
×