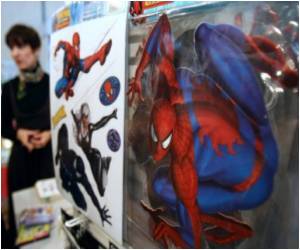 The copy of the Marvel comic book, in excellent condition, sold through ComicConnect.com with a cover that shows the spidery avenger -- in his other life known as the meek Peter Parker -- swinging from a high building with a man under his right arm.

A hummingbird robot that can flutter around freely in mid-air with rapid wing movements has been unveiled by Japanese scientists.
Advertisement

Five decades ago, the comic went for just 12 cents.


The big sale has been bested only by the $1.5 million price reached for Superman's 1938 debut comic book last year. The 1930s to 1950s are seen as comics' golden age and surviving copies are keenly collected.

Spacesuits of the Future Will Be as Flexible as Spidermans

Scientists at the Massachusetts Institute of Technology (MIT) are working towards constructing a space suit that promises to be more flexible .
Advertisement
"The late 1950s and early 1960s are considered the Silver Age for comic books," said ComicConnect.com founder Stephen Fishler in a statement.

"People have often wondered how much this near-perfect condition book would sell for, and today we found out," Fishler said.

The Root of Kirsten Dunsts' Issues Stuns Public: It is Depression and Not Drugs

American actress Kirsten Dunst has revealed that she checked into rehab to seek treatment for depression, not drugs.
Advertisement
<< Why the Right Hand Dominates in Most of Us
Stay Fit With Wii Fit: Really! >>

Kirsten Dunst Ward Off Her Flying Phobia by Using Headphones