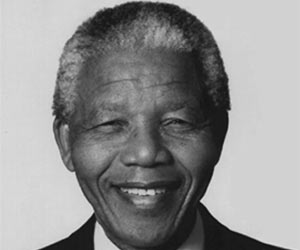 Even as Nelson Mandela was buried with full state honors, speculation indicates that the gravesite of the statesman will be permanently off limits for the general public.

This was the question on many lips as the democracy icon was buried with full honours in his rural boyhood village of Qunu on Sunday -- shielded from prying eyes and telephoto lenses.

Among the multitude of logistical and protocol arrangements for the state funeral, South Africa's government has made no announcement on the status of the gravesite afterwards.


While family members, politicians and celebrities got to say their goodbyes at the grave, Mandela's village neighbours and many people around the world will be hoping to get the chance to do so later.
Advertisement
The anti-apartheid icon's family had previously hinted the site will remain a private shrine, but the architect they employed to design the memorial spot suggested on Sunday it may ultimately be opened to the public.

According to Johannesburg-based Greg Straw, the 3.2-hectare (eight-acre) garden is meant to be turned into a memorial where people can pay their respects.

"Down the line it will be a memorial garden with a museum" at the foot of the hill on which the grave is perched, he told AFP by telephone Sunday from the funeral in Qunu.

In June, Mandela's oldest surviving child Makaziwe, 59, told the state broadcaster that: "Family graveyards... they're not for public."

But the government has suggested in recent days that the Mandela family may ultimately grant access to the grave.

His relatives had "been very generous" in the past in allowing the public access to the family farm at Qunu, government minister Collins Chabane told journalists a day before the burial.

"It will be for them to decide, if after the funeral, after a period of mourning, they want to allow some form of access."

Straw said Mandela's final resting place was at the top of a hill overlooking the village where he spent his boyhood and much of his retirement -- on a small family burial plot about two kilometres (1.2 miles) from his childhood residence in Qunu.

The grave is in a garden with a winding path designed to lead visitors along South Africa's first black president's "long walk" to freedom, the architect said.

The path stretches about 1.2 kilometres (three-quarters of a mile) from the foot of the hill to Mandela's final vantage point.

"Every time you go and pay your respects you walk through the life and times of Madiba," Straw said, using Mandela's clan name.

"You walk along a flat portion of the hill while everything was calm and then when he got incarcerated, it turns the corner and the pathway starts winding up the hill through the times of the struggle and it gets to the top of the hill when he got released," Straw said.

The idea for the path was inspired by Mandela's autobiography "Long Walk to Freedom", published after he was freed from 27 years in prison under the apartheid regime's oppressive racial laws.

A film of the same title was released just weeks before Mandela's death on December 5.

"You know the old man went through so much," and after walking the path, "people will turn around and say 'Wow, that's a long way to walk'," Straw said.

He spoke of the challenges of converting a plot of cattle pasture bereft of trees or plants into a memorial site befitting one of the world's greatest statesmen.

Straw travelled many times between Qunu and Mvezo, Mandela's birth village about 20 kilometres (12 miles) away, to collect plants for the garden -- everything from aloes and acacias to varietals of wild grass.

"I collected plants from where he used to play and bring them into his garden," he said. "I brought them to Qunu and rearranged them so that I could recreate a piece of Mvezo in Qunu."

Plans for the museum and features of the memorial garden, started a few years ago, have yet to be completed, as it would have been insensitive to finish the project while Mandela was still alive, Straw said.

"I think later people may be allowed to come and see Tata's (father's) grave. But probably not in the near future," said Qunu resident Thobile Dyantyi, 23.

The burial plot also holds the remains of Mandela's parents and three of his four children from his first wife Evelyn Ntoko Mase.

It is not uncommon in South Africa for family members to be buried near each other on ancestral land.

Source: AFP
Advertisement
<< Sleeping Sickness Could be Combated by Silencing Signals Se...
Percentage of Privately Insured Population With Diabetes an... >>

From Streets to Nuclear Particle, Mandela's Name Resonates Across the World
Rarely has a man been so honored during his lifetime as Nelson Mandela as he has had streets, ......

Nelson Mandela Shirts Showed He was True to Himself
Since Nelson Mandela died last week, Pathe Ouedraogo can barely keep up with demand for his "Madiba ...

The Magic of Mandela Recalled
With his unique ability to connect to the poor, his colourful shirts, his ready quips and his ......