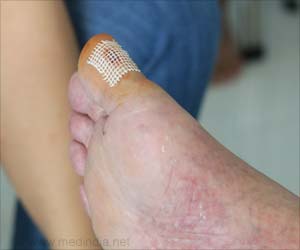 By reversing the role of a Thrombospondin-2 (TSP2) gene, diabetic wounds can be induced to heal faster, finds a new study. TSP2 protein is responsible maintaining defective wounds for a long time and thereby deleting this gene can help heal these devastating wounds faster.

The findings of this study is going to be presented at Experimental Biology 2018. Once they form, they can persist for months, leading to painful and dangerous infections.The new research uncovers the role of a particular protein in maintaining these wounds and suggests that reversing its effects could help aid wound healing in patients with diabetes.

"We discovered that a specific protein, thrombospondin-2 (TSP2), is elevated in wounds of patients with diabetes as well as in animal models of diabetes," said Britta Kunkemoeller, a doctoral student at Yale University who conducted the study. "To determine whether TSP2 contributes to delayed wound healing, we genetically removed TSP2 from a mouse model of diabetes and observed improved wound healing. Our study shows that TSP2 could be a target for a specific therapy for diabetic wounds."


Kunkemoeller will present the research at the American Society for Investigative Pathology annual meeting during the 2018 Experimental Biology meeting, held April 21-25 in San Diego.
Advertisement
Diabetes currently afflicts nearly 26 million Americans, more than 8 percent of the population. Diabetic wounds are one of many complications of the disease.

Treatment for these wounds is mostly limited to standard wound care, such as moist bandages, removal of damaged tissue and footwear that reduces pressure on the wound. Despite these measures, the wounds often persist. In the most severe cases, it becomes necessary to amputate the affected foot or lower leg; diabetic wounds are the leading cause of amputations in the United States.

Most previous work on wound healing in diabetes has focused on the types of cells that are involved in wound healing such as immune cells, skin cells and the cells that form blood vessels. By contrast, Kunkemoeller's research focuses on TSP2, a component of the extracellular matrix. The extracellular matrix is a meshwork that serves as the structural foundation for cells, like the scaffolding used in construction.

In addition to providing structural support, the extracellular matrix regulates processes that are important to wound healing, including the behavior of immune, skin and vessel-forming cells. TSP2 is a component of the extracellular matrix that influences how the matrix is formed, as well as the development and communication of other types of cells that grow within the matrix.

"Our focus on TSP2, therefore, allowed us to study a single molecule that influences several wound-healing related processes," explained Kunkemoeller.

The team bred mice that develop type 2 diabetes but cannot produce TSP2. When the researchers induced wounds in these mice, they found that the mice without TSP2 healed significantly better and faster than other mice that had diabetes along with normal levels of TSP2.

They also analyzed the factors that influence how much TSP2 the body produces. That part of the study revealed that TSP2 production increases when blood sugar levels are higher, explaining why people with diabetes have higher levels of TSP2 than people without diabetes.

"Currently, our lab is developing engineered biomaterials derived from extracellular matrix that lacks TSP2," said Kunkemoeller. "Our plan is to apply such materials to diabetic wounds in mouse models in order to evaluate their efficacy. Going forward, additional research will focus on either preventing the production or inhibiting the function of TSP2 in diabetic wounds."

Impact of Diabetic Foot Ulcers Worse Than Previously Thought
Foot ulcers are a common complication of poorly controlled diabetes, forming as a result of skin ......