Special Lenses to the Rescue for Spectacle Wearers from Fogging 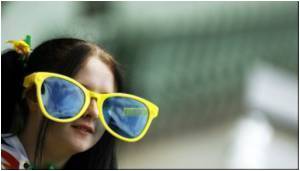 Experts have developed a novel lens coating set to liberate spectacle wearers who tend to struggle to see as moisture from their breath condenses on their glasses.

And anyone working in a steamy kitchen is also likely to be plagued by the problem.

Bionic Spectacles On The Anvil

Spectacles incorporating the latest computer technology are on display at the Royal Society Summer Science Exhibition that opened in London on Tuesday.
Advertisement

Normally, when warm air hits the colder surface of a pair of glasses, water vapour condenses on the lenses as tiny droplets. But the new coating prevents the droplets from forming, meaning the condensed waters forms a thin layer over the lens instead and that layer is effectively invisible to the glasses wearer.


Called Optifog, the technology has been created by Essilor, a French lens-manufacturing company, after five years of research.

The lenses are available to customers at independent opticians and will cost an average of 25 pounds for the coating on a pair.

Traditional bifocals may soon become passé with the invention of electronic glasses that automatically adjust and enable the user to view objects at different distances.
Advertisement
Essilor's coating uses a metal compound the firm is keeping secret for commercial reasons. A special alcohol-based liquid should be applied to the lenses weekly by wearers to maintain the layer.

"Our researchers are dedicated to exploring ways to make wearing glasses as close as possible to natural vision. Optifog represents a significant step towards achieving that goal," the Daily Mail quoted Mike Kirkley, managing director at Essilor as saying.

Children in the Developing World Can Look to Revolutionary Spectacles Invention

Vent Forte (Theophylline) Blood Donation - Recipients The Essence of Yoga Drug - Food Interactions Find a Doctor Nutam (400mg) (Piracetam) Noscaphene (Noscapine) Calculate Ideal Weight for Infants A-Z Drug Brands in India Blood - Sugar Chart
This site uses cookies to deliver our services. By using our site, you acknowledge that you have read and understand our Cookie Policy, Privacy Policy, and our Terms of Use