Spare the Foot Massage and Spoil the Child?

The old proverb of the rod and the spoilt child is long dead now! Teachers may now have to resort to foot and head messages to control a spoilt child's bad behavior!

A London-based company, Bud-Umbrella, is gearing up to test the alternative therapy in 60 primary and 14 secondary schools to see whether or not it can actually improve unruly children's behavior.

Though there is little evidence that such a treatment can improve behavior, Lambeth Council in south London is said to have decided to spend 90,000 pounds next year on reflexology in the schools.


Bud-Umbrella's official web site says that reflexology may be beneficial in a number of ways.

"It can calm aggressive feelings, improve listening skills, concentration and focus. It can relieve anxiety and stress, and improve confidence and self esteem," Telegraph quoted the web site as saying.

Lambeth Labour councillor Paul McGlone said: "It's incredibly important that we address young people's behavioral problems and we make no apologies for using different and innovative methods but this obviously won't replace more traditional ways of dealing with anti-social behavior. We need to deal with the root causes of young people's behavioral problems and nip them in the bud - prevention is better than cure."

However, everyone is not gaga about the initiative.

Tory MP John Penrose dismissed the alternative therapy, saying: "Experienced teachers have a range of ways of dealing with badly behaved pupils and stroking their feet is not one of them."

Mark Wallace, from the TaxPayers' Alliance, said: "How on earth is the education system going to succeed if there are luxuries given out for naughty children and nothing at all given to those who work hard and do well? With everyone struggling in the financial crisis, this is crazy money being paid out on a crazy scheme."

Oz Popularity Rates of Alternative Therapies Touch a New High
The number of people visiting complementary health professionals in Australia has increased by 50 per cent in the last decade.
READ MORE

Rheumatoid Arthritis Patients Take to Meditation to Ease Depressive Symptom
A revered contemplative practice for centuries, meditation has recently inspired research into its therapeutic value for everything from anxiety disorders to heart attack prevention.
READ MORE 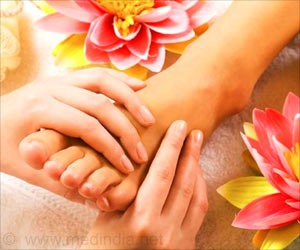 Self-Massage Types
It seems improbable to massage your body, but once you do, it is a stress buster.
READ MORE