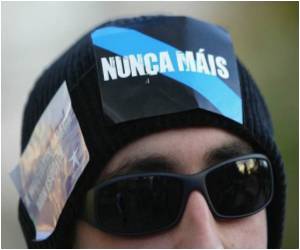 Spanish fishermen who took part in a clean-up operation after the Prestige oil tanker spill in 2002 have shown symptoms of chromosomal damage and respiratory problems, a study released Tuesday said.

The study, conducted by Spanish researchers between September 2004 and February 2005 on 501 fishermen who helped clean up Europe's worst oil spill, was published in the American review Annals of Internal Medicine.

Scientists have developed a new material containing soap like molecules, that can turn oil into a solid gel - a property that could help clean the Gulf oil spill mess.
Advertisement

On November 19, 2002 Liberian-flagged oil tanker the Prestige broke up and sank off Galicia in northwestern Spain, a region famed for its pristine coastline and ecological diversity.


The ship spewed 64,000 tonnes of thick, heavy fuel oil into the waters, polluting thousands of kilometres (miles) along the Atlantic coast of France, Spain and Portugal.

The Gulf of Mexico oil spill could have a lasting impact on the health of those living in the vicinity.
Advertisement
The Spanish study said "those who participated in the clean-up had a higher prevalence of respiratory symptoms, higher levels of markers suggestive of airway injury in exhaled breath condensate, and chromosomal alterations in lymphocytes compared with those who did not participate in clean-up activities."

It said "chromosomal damage in circulating lymphocytes is an early marker of genotoxicity associated with increased risk for cancer."

It concluded that "participation in clean-up of a major oil spill seemed to have adverse health effects."

But it warned that "the study does not prove that oil exposure caused the abnormalities."

And it said "the findings cannot be extrapolated to spills of other types of oil" and "therefore cannot predict what effects individuals exposed to other oil spills, such as that in the Gulf of Mexico and elsewhere, might experience."

But the researchers urged that "the authorities responsible for organizing (oil) clean-up operations take appropriate measures to guarantee the health protection of those involved in the clean-up activities and establish registries to systematically assess possible adverse health outcomes in exposed workers over time."

British Petroleum's oil spill in the Gulf of Maxico is the world's worst accidental release of oil with nearly five million barrels spilled, The Obama administration has said.
Advertisement
Advertisement