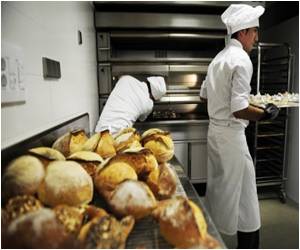 The exquisite cured ham called Jamon Iberico is the star of Spanish cuisine, made from distinctive Iberian black pigs but the economic downturn gripping Spain has hurt domestic sales and producers are looking to boost their fortunes abroad.

To help market the product overseas, they want to tighten the rules regarding what can officially be labelled as a top-end ham made from Iberian black pigs -- which are indigenous to Spain -- to distinguish them from less expensive hams made from lower quality pork from white pigs.

"They are nothing like each other," said Ramon Estevez, who is in charge of quality control at renowned Spanish ham producer Beher.


He gazed at the herd of pigs grazing in a field near the village of Guijuelo about 200 kilometres (120 miles) west of Madrid in the province of Salamanca.
Advertisement
"Iberian pigs produce oleic acid, which is similar to that found in olive oil. No other animal in the world does this," he said, adding this gives pork products made from the animal a more intense taste.

The pigs feed exclusively on acorns between November and March.

During the rest of the year they eat cereals since it is not possible to store acorns for long after they are harvested.

The acorns give the fat of the pigs its unique, sweet flavour. Cured ham made from Iberian black pigs can cost over 100 euros ($130) per kilo and as much as 4,000 euros for a whole leg of ham that has been slowly cured for over seven years.

But due to the economic downturn farmers have drastically reduced their herds from four million pigs three years ago to just two and a half million today.

Salamanca and the regions of Extremadura and Andalucia are the main breeding areas for Iberian black pigs.

"The pure acorn-fed Iberian ham is one of the world's most special products, such as good caviar or good foie gras," said Alejandra Anson, the head of Elite Gourmet, a non-profit foundation that affixes a seal of quality on top Spanish products.

"This is something very special that Spain does not know how to sell."

There are currently eight different denominations of origin for cured ham made from Iberian black pigs. Officials fear this will confuse consumers and allow some producers to take advantage of the uncertainty to mislead them.

The top label is given to ham made from the Iberian pigs which put on at least 45 kilos during their final months of life by eating just acorns.

"It is unthinkable to try to enter international markets with eight different types of ham," said Fernando Burgas, the director general for the food industry at the agriculture ministry which plans to reduce the number of denominations of origin to three.

As he strolled through his sprawling warehouse where 100,000 hams were hanging to dry in the arid air of Guijuelo, Arturo Sanchez praised the "hard to match quality" of pure Iberian ham.

Like Beher, which sells around 30 percent of its production abroad, Sanchez is counting on exports to support the family brand that bears his name and which has been produced since 1917.

"This crisis has helped us launch ourselves abroad," he said near a room where thousands of sausages were being smoked over a fire.

"A few years ago, our exports accounted for only one to two percent of our business. Today there is ten to fifteen percent," he said.

Sanchez fears the government's plans to reduce the number of denominations of origin may not do enough to protect the product's top range.

He thinks it is up to his family business "to fight to assert our quality".

"Everything regarding the breed of the pig and the way it is raised must be tightly controlled," he said as he tended to his pigs.

They still have a few more kilos to gain before they will be killed next year.

Cannabis Clubs Thrive Discreetly in Spain
Lush green marijuana leaves bask in the sun before being harvested, dried and consumed in the ......

Spain to Tighten Abortion Laws, Irrespective of Criticism
Under pressure from the Catholic Church and its conservative wing, Spain's government has vowed to ....