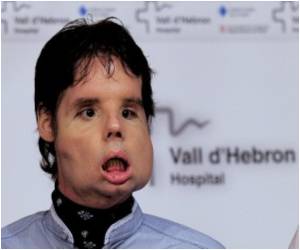 A Spanish man who underwent the world's first full face transplant appeared before TV cameras on Monday for the first time since his surgery in March.

"Friends, I want to thank the hospital coordinators, the entire medical team, the family of the donor and most of all my family who are supporting me these days," said the 31-year-old, who was identified only as Oscar.


The man, speaking just before checking out of hospital, spoke with considerable difficulty and could not close his mouth and his face appeared swollen.


He reportedly suffered injuries in a shooting accident five years ago.

He wore a blue scarf which hid scars on his neck and his hair was combed foreward to hide scars on his forehead which doctors say will be fully concealed in the future.

A team of about 30 experts carried out the transplant on March 20 at Barcelona's Vall d'Hebron hospital on the man, who could not swallow, breath or talk normally due to his injuries from the accident.

During the 24-hour-long operation, he received new facial muscles, skin, nose, lips, a jaw, teeth, a palate and cheekbones, the leader of the medical team that carried out the procedure, Joan Pere Barret, told the news conference.

"Bit by bit he is improving but he nonetheless has a long and difficult road ahead to have intelligible speech like he had before," he added.

While 11 other face transplants have been carried out around the world previously, Barcelona's Vall d'Hebron hospital says they involved only part of the patient's face.

The first successful face transplant was performed in France in 2005 on Isabelle Dinoire, a 38-year-old woman who had been mauled by her dog.

Since then face transplants have been carried out in China, the United States and Spain, which carried out its first such operation in August 2009.

Spain led the world in organ donations in 2009 for the 18th consecutive year, according to the health ministry.

Spanish Hospital Claims to Have Performed First Complete Face Transplant
A Spanish hospital said Thursday it performed the world's first complete face transplant in March on a man who could not swallow, breath or talk normally following an accident five years ago.
READ MORE