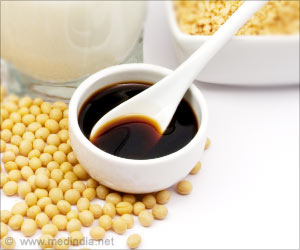 A diet rich in soy may help women's hearts stay healthy and disease-free, but it is important that women start eating a lot of soy foods long before menopause, finds a new study published online in Menopause, the journal of The North American Menopause Society.

Soy or Soya is a crop which has been cultivated from thousands of years. It belongs to the family of legumes.
Advertisement

Researchers at Wake Forest School of Medicine in Winston-Salem, NC, reached those conclusions based on their feeding study of cynomolgus monkeys before and after surgical menopause. They fed premenopausal monkeys a diet with protein derived mainly from animal sources or a diet with protein from high-isoflavone soybeans.

Soyabean is the richest plant source of protein containing 43 percent protein. Soy protein is also of the highest quality amongst all legumes.
Advertisement
After 34 months, cholesterol levels were good in the monkeys who ate soy before and after menopause. And for those that switched to a soy protein diet after menopause, similar to some North American women concerned about their heart health, cholesterol levels did improve significantly (with lower total, LDL, and VLDL and higher HDL). But when it came to how much plaque progressed in the arteries, there weren't any statistically significant differences, despite trends favoring a lifelong soy diet and the switch to soy after menopause.

As far as the total amount of atherosclerosis was concerned, monkeys eating a lifelong soy diet showed a much lower proportion of complicated plaque in the arteries than the other monkeys.

These findings add to the similar ones from the Women's Isoflavone Soy Health (WISH) clinical trial on atherosclerosis in women after menopause, but this animal study was able to model what the effects of a soy diet or soy supplements may be, based on women's diets and heart health before menopause or very early after menopause, when artery plaques may still be small.

"This study underscores how important it is for women to get into the best cardiovascular shape they can before menopause. The healthy habits they start then will carry them through the years to come," says NAMS Executive Director Margery Gass, MD.

Animation of Heart Attack symptoms. Heart attack is caused due to ischemia of the heart muscles that results in pain and the other symptoms of heart attack.
Advertisement
<< Nonsurgical Correction of Congenital Heart Disease
Increase in Water Vapour in Atmosphere Intensifies Global W... >>