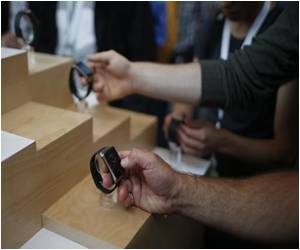 South Korea's LG and Samsung launched rival smartwatches powered by Google's new software as they jostle to lead an increasingly competitive market for wearable devices seen as the mobile industry's next growth booster.

Samsung's "Gear Live" and LG's "G Watch" -- both powered by Android Wear -- are the first devices to adopt the new Google software specifically designed for wearables.

A new smartwatch has been launched by Samsung, which is capable of making calls and receiving data without having a connection to a smartphone
Advertisement


The two devices cannot make phone calls by themselves but can be connected to many of the latest Android-based smartphones, the South Korean companies said in separate statements.

Smartwatches may Not be Hot Picks This Year

Wearable computing is the latest market where every tech company is laying its hands on, but this year, a new study has revealed that smart gear like watches will not be featured on many consumers' holiday wish lists.
Advertisement
Samsung and LG are the world's top and fourth-largest smartphone maker, respectively.

G Watch opened Thursday for online pre-order in 12 countries including the United States, France and Japan before hitting stores in 27 more including Brazil and Russia in early July.

The launches come as global handset and software makers step up efforts to diversify from the saturated smartphone sector to wearable devices.

Samsung introduced its Android-based Galaxy Gear smartwatch last year but it was given a lukewarm reception by consumers.

The second edition, Gear II, was unveiled in February and based on Samsung's own Tizen softwear in a move to break free of its heavy reliance on Google's Android platform.

Samsung's arch rival Apple is believed to be set to launch its own smartwatch soon, while Google is moving towards a wide consumer launch of its eyewear Google Glass later this year.

Global smartwatch sales are expected to grow this year by more than 500 percent from 1.9 million units in 2013, according to the market researcher Strategic Analytics.

Stealing the limelight from smart phones and tablet computers, smartwatches look set to dominate this year's IFA consumer electronics fair in Berlin.
Advertisement
Advertisement
This site uses cookies to deliver our services.By using our site, you acknowledge that you have read and understand our Cookie Policy, Privacy Policy, and our Terms of Use  Ok, Got it. Close
×