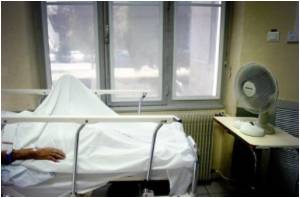 South Korea reported its fifth death from MERS as the government vowed "all-out" measures to ease growing public fear over the largest outbreak outside Saudi Arabia.

The number of infections rose to 64 after 14 new cases, including one death, of Middle East Respiratory Syndrome (MERS) were confirmed on Saturday night, the health ministry said.

The World Health Organization said it would send experts to South Korea for a joint mission with the government in collecting information of the MERS outbreak.
Advertisement

All of the 14 were among group of 1,820 quarantined after being exposed to those diagnosed earlier, it added.


However, Busan city authorities reported an additional case in the country's southern port and second-largest city, sparking alarm that the outbreak may spread nationwide.

About 70% of the total institutions closed are in the Gyeonggi province where most MERS-infected cases have been allegedly found.
Advertisement
The case was not included among the 14 new infections confirmed by the health ministry.

Acting Prime Minister Choi Kyung-Hwan vowed Sunday that "all-out efforts" would be made to curb the spread of the disease in Asia's fourth-largest economy.

He urged the public not to panic, saying all 64 patients had already been in hospital.

"We can put the situation under control because... the outbreak is not spreading to the outside community," Choi said in a press conference.

"People should not overreact and should cooperate closely (with the government) to minimize negative impact on the economy," he said.

The government will step up monitoring on those placed under observation, including tracking the locations of those in quarantine at home via their mobile phones, Choi said.

"Please understand that it is an inevitable measure to ensure the safety of your neighbors and families," Choi said.

The administration of President Park Geun-Hye and health officials have come under a storm of criticism over perceived slow and insufficient response to the outbreak.

A policy not to name the hospitals where patients were diagnosed or treated was a major focus of public criticism.

Choi on Sunday disclosed the list of 24 such hospitals -- mostly in Seoul or Gyeongi province surrounding the capital -- saying it was aimed at "easing public anxiety."

Bigger budget support was also promised for those placed under quarantine and for local governments and school authorities struggling to contain the outbreak.

Most of those under quarantine have been told to stay home and strictly limit their interactions with others, while some have been isolated in state hospitals.

The first case -- reported on May 20 -- was of a 68-year-old man diagnosed in the city of Pyeongtaek, about 65 kilometers (40 miles) south of Seoul, after a trip to Saudi Arabia.

Health officials came under fire earlier for allowing an infected man to travel to China despite warnings from doctors.

With the number of new cases growing on a daily basis and public fear rising, more than 1,300 schools were closed temporarily and school trips, public events and sports games were cancelled across the country.

More than 53,000 foreign travelers have cancelled planned tours to the South since last week, Seoul's tourism board said.

The World Health Organization (WHO) said on Friday it would send a team of experts to South Korea for a joint mission with Seoul in collecting information of the outbreak.

The team will arrive in Seoul early this week, a health ministry official said last week.

MERS has now infected more than 1,110 people globally, with 437 deaths. More than 20 countries have been affected, with most cases in Saudi Arabia.

The virus is considered a deadlier but less infectious cousin of Severe Acute Respiratory Syndrome (SARS) which killed hundreds of people when it appeared in Asia in 2003.

Two deaths and 30 cases due to the MERS virus has lead to the suspension of classes in more than 200 schools in South Korea, revealed Minister Hwang Woo-yea.
Advertisement
Advertisement