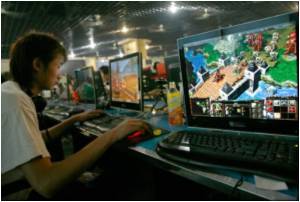 South Korea has introduced a new law making it illegal for young gamers to play online after midnight, as part of a move to reduce online addiction.

According to Yonhap news agency, the new law - which bans anyone under 16 from playing online into the early hours - was passed by lawmakers worried about growing levels of addiction to gaming among youngsters.


The Ministry of Gender Equality and Family said the law was a means to combat teenagers' gaming addiction following a series of tragic incidents.

Computer Games to Cope With Cancer

'Re-mission' - a free computer game simulates cancer, its effects and its treatment. It prompts children and young adults to fight the cancer.
Advertisement
In May 2010, a South Korean couple was jailed for negligent homicide after they left their baby daughter to starve to death while they raised a "virtual" child on the Internet.

In March of the same year, a 32-year-old man died after reportedly playing for five days with few breaks.

Following the incidents, the government, which estimates that the highly wired nation has about two million web addicts, announced a campaign to combat the affliction.

Diseases that were 'Adults only' now have a special preference for children. The cause is no great mystery and we all know it -childhood obesity
Advertisement
<< Smoking Ban in China Comes Into Force
Dual-Energy CT Can Help Diagnose The Severity Of Gout >>