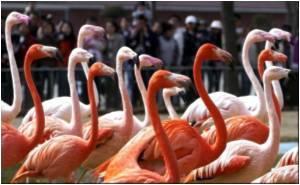 Six new quays for cruise ships will be created on the southern resort island of Jeju and in the western port city of Incheon and other coastal towns, the tourism ministry said.
Advertisement

The government will establish some 1,500 kilometres (932 miles) of eco-friendly trails with state money, it said.

It said visa restrictions for Chinese low- and mid-budget tourists would be eased and all tourist signs would feature the Chinese and Japanese languages.
Advertisement
"Our government expects these measures will help attract Chinese tourists preemptively, as they are emerging as the major customer of the world's tourism market," Tourism minister Yu In-Chon told reporters.

South Korea has seen a steep increase in Chinese tourists in recent years.

Some 1.46 million Japanese tourists came during the first half of this year, down four percent from the same period last year, while Chinese tourists increased by 35 percent to 819,000.

The ministry's new measures were unveiled at a meeting chaired by President Lee Myung-Bak in Nami, a resort island east of Seoul, where "Winter Sonata," a popular Korean drama series broadcast throughout Asia, was filmed.

The small island in the middle of a river has attracted hundreds of thousands of tourists from Japan, China and Southeast Asian countries.

Source: AFP
Advertisement
<< Promising Time in the Global War Against AIDS
August 13 is the Day Set for the First Gay Marriage in Arge... >>

Britons are Worst-Dressed Tourists in Europe: Survey
British people are the worst-dressed holidaymakers in Europe followed by Germans, while the ......

World Cup Tourists Look Forward to the Excitement Ahead
Camera-armed tourists cannot wait for the excitement of the World Cup and the grand holiday that ......