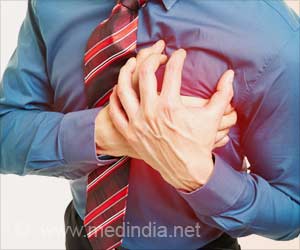 South Asian-Americans were found to be more likely at risk of developing heart disease and stroke when compared to East Asians or non-Hispanic whites in the U.S.

Clinical experts at Rush University Medical Center reported this finding in a new scientific statement they co-authored that is being published in the American Heart Association journal Circulation.

Advertisement
‘Lack of regular physical exercise and poor dietary habits are the factors that increase the risk for South Asian-Americans.’

Atherosclerosis is a disease in which the arteries become narrowed and hardened due to a build-up of plaque inside of the artery wall. As a result, the flow of blood through the arteries is reduced and can become blocked, resulting in a heart attack, or a stroke if the blockage is in cerebral artery.


The statement provides an overview of the behaviors that influence the risk factors for heart disease and stroke among South Asian-Americans based on a review of existing scientific research.
Advertisement
More than 3.4 million people who identify themselves as South Asians live in the U.S. About 80 percent of them are immigrants from India or of Indian ancestry, with others tracing their origins to Bangladesh, Bhutan, the Maldives, Nepal, Pakistan and Sri Lanka.

Grouping all Asians together produces deceiving health data. "Statistics about heart disease and stroke risk among Asians can be deceiving when all people of Asian ethnicity are combined into one group," said cardiologist Dr. Annabelle Volgman, chair of the American Heart Association's statement writing group and medical director of the Rush Heart Center for Women at Rush University Medical Center.

Compared to people of European ancestry, South Asian-Americans have the following increased heart health risks a greater risk of having severe atherosclerosis; more likelihood that multiple segments of their arteries are narrowed by atherosclerosis; higher levels of artery clogging LDL cholesterol and triglycerides and lower levels of HDL (good) cholesterol, which predispose the arteries to develop fatty deposits in artery walls that cause them to narrow; a higher level of calcium deposits, a marker for atherosclerosis, if they are of Indian ancestry and over age 60; more risk of diabetes, which is believed to accelerate atherosclerosis developing diabetes at a younger age.

Poor diet habits, lack of exercise contribute to higher risk for South Asians. The statement also focuses on behavioral factors that may increase the risk of developing atherosclerosis among South Asian-Americans and suggests ways that they can be changed to improve health.

"Diet is a key factor. Many South Asians, even if they are vegetarians, eat a lot of saturated fats from tropical oils such as palm and coconut oil and refined carbohydrates such as sugar, white bread and highly processed foods," Volgman said.

Ongoing studies are evaluating efforts to improve diet quality among South Asians by reintroducing traditional whole grains, which were once a mainstay of the diet in the South Asia region, in addition to suggesting replacing ghee (butter with all the water removed) with monounsaturated oils, such as olive, corn or other oils.

"As health care providers, we need to do a better job of helping our South Asian patients understand the importance of exercise, because many don't realize how important it is to their health," said Volgman. The authors cite studies that suggest that community programs that encourage South Asians to exercise and reduce stress through yoga, Bollywood dancing or other culturally specific physical activities are likely to be more successful than other forms of physical activity.

South Asians represent one of the fastest growing ethnic groups in the U.S. The statement concludes with a call to action to include more participation by South Asians in research studies to better understand how to reduce their risk for heart disease and stroke.