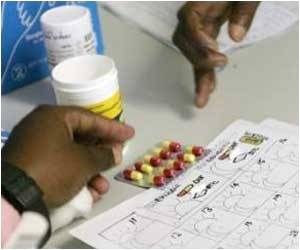 Researchers have identified an experimental compound dubbed TTT-3002 as potentially one of the most potent drugs available to block genetic mutations in cancer.
Advertisement

Her consultation room is ringed by orderly shelves of transparent jars containing a kaleidoscopic collection of coloured powders and roots.


Each is carefully labelled and ready to be prescribed to patients who undergo a physical examination that accompanies divination involving bones, sea shells, dice and coins.

Experts suggest that an experimental cancer drug developed by Pfizer could provide a potential treatment in slowing down the spread of advanced breast cancer.
Advertisement
The scene is far from the common perception of dishevelled and old-fashioned sangomas waving sticks around and operating from dingy huts in rural backwaters.

While that image still rings true in some cases, a new generation of urban practitioners are presenting a much more modern spin on the traditional practice.

Social science graduate Nokulinda Mkhize, 28, has been practising for five years and consults her clients face-to-face or via Skype.

Her @noksangoma Twitter feed has nearly 7,000 followers and her slickly designed website features an online store, a brief autobiography and some newspaper columns she has written.

Embracing technology for consultation is "a logical, natural step" making her "more accessible" to patients needing her services, she said.

It "allows me the freedom and flexibility to express my gifts in ways that are less restricted, and more true to who I am, as a young woman," she said, adding the decision to become a sangoma was a "calling, my destiny."

Sangomas have played a key role in South Africa for decades, and are consulted not only on illnesses but also for communication with the dead.

New practitioners must go through long initiations, learning the uses of herbs and other items before they are considered ready to start a practice.

But they still lack the sort of formal qualifications and regulation that have increasingly become necessary for practitioners of Chinese alternative medicine, aromatherapy and the like.

Data about how many South Africans actually visit traditional healers is hard to come by, but it is clear millions of South Africans regularly consult the tens of thousands of practitioners operating across the country.

A Durban-based economist, Myles Mander, led a study four years ago that estimated the trade in traditional medicine to be worth nearly three billion rand ($280 million) each year.

"There's big demand for the medicine and it's not going away," said Mander. "Almost in every town, there are hundreds if not thousands of market players."

For many it is a cheap and trusted alternative to expensive Western medicines.

Gradually, sangomas have gained official recognition for the role they play in South African society.

The country's top court last year ruled that sick notes handed out by sangomas are valid and should be accepted by employers.

Previously, workers would consult traditional healers but pass through medical doctors' rooms "to buy" a sick-note.

Today some traditional healers are receiving training in basic paediatric oncology and in managing the treatment of tuberculosis and HIV/AIDS.

And a network of "pharmacies" retail neatly packaged herbs, some of which are also found in some conventional chemists in Johannesburg shopping malls.

One Johannesburg medical doctor, who asked not to be named for fear of losing her licence, said she has used sangoma's herbs herself and sometimes prescribes them to patients.

"I found them to work beautifully... and sometimes I recommend them, if they are willing, and if they are not then I go the conventional way."

But favourable court rulings notwithstanding, the sector is almost unregulated, leading to uncertainty about the efficacy of medicines and fears of abuse by quacks and charlatans.

Many less scrupulous "healers" claim to have powers to increase wealth.

In major towns and cities adverts for penis enlargement and vagina-tightening spells are legion.

Instances of traditional medicine crossing the line into witchcraft and even human sacrifice are not unheard of.

"Traditional medicine can be dangerous. A lot of those medicines have very powerful toxins," warned Mander. "They provide a lot of good, but people also die."

Traditional healers are angry that medical boards are not ready to give African medicine the same standing as Chinese, Ayurvedic, aromatherapy or a panoply of other complementary treatments, which have begun the process of certification.

"It's an insult, a disgrace that we have a medicine control council that has not been able to register African traditional medicine, but it accepts Chinese medicine," said Rui de Carvalho, who ditched a cushy IT job to become a traditional healer.

But the lack of regulation has much to do with cost. A lack of funding to carry out hugely expensive clinical trials means traditional herbs are not certified by the country's medicines control agency.

Health Minister Aaron Motsoaledi sees many grey areas and has said "it's clear that's an area in South Africa that we need to control".

While a younger generation may demand more scientific rigour, many see the current debate as beside the point.

Robina Dlamina has used traditional medicine for close to 20 years.

"It works faster and better," than western medicine, she said.

Research has shown a drug, used in combination with chemotherapy to treat advanced colorectal cancer is not effective in some settings and indeed may result in more rapid cancer progression.
Advertisement
<< New Method for Prostate Cancer Detection can Save Men from ...
'Kangaroo Care' Beats Incubators for Colombian Preterm Babi... >>