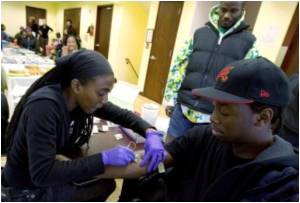 South African student and teacher unions have strongly slammed a state plan to introduce HIV testing for children at schools.

The plan is a part of the extension of the HIV testing scheme launched by President Jacob Zuma last April.The government believes that enabling sexually active pupils to know their HIV status could allow early access to life-saving treatment and help prevent the spread of the infection, reports the Guardian.

However, opponents of the voluntary programme say children may not be psychologically prepared to deal with a positive result or the stigma likely to follow.


The tests are expected to begin at secondary schools next month during weekends and holidays.

"We suspect we may be heading for disaster. Even parents are afraid to take HIV tests, so you can imagine a 13-year-old. Some will be afraid to say no to their teachers," Allen Thompson, deputy president of the National Teachers' Union, said.

Do you know that there are symptoms for each stage of HIV/AIDS? Learn more from our HIV Symptom Quiz but here's a disclaimer - never go by symptoms alone. Symptoms only indicate the progression of the disease, while only a medical test can confirm it.
Advertisement
He accused the health department of using children to make up ground in its ambition for the world's biggest HIV testing scheme.

Meanwhile defending the scheme, Fidel Hadebe, a spokesman for the health department, said it had not yet been decided how the testing would be implemented.

Statistics tell us that the world HIV+ population has risen drastically from 8 million in 1990 to a whopping 33 million in 2007! Even more alarming is the fact that young people (below the age of 25) account for half of these infections! This is adequate proof for the lack of awareness among the general public even in these modern times. So take our quiz and brush up on the essential facts of HIV/
Advertisement
<< Female Genital Mutilation Spreads to Europe, US, with Migra...
Study Links Childhood Obesity to Working Mothers >>

The Essence of Yoga Find a Doctor Accident and Trauma Care Drug Side Effects Calculator Drug Interaction Checker Loram (2 mg) (Lorazepam) Diaphragmatic Hernia Turmeric Powder - Health Benefits, Uses & Side Effects How to Reduce School Bag Weight - Simple Tips Indian Medical Journals
This site uses cookies to deliver our services.By using our site, you acknowledge that you have read and understand our Cookie Policy, Privacy Policy, and our Terms of Use  Ok, Got it. Close
×