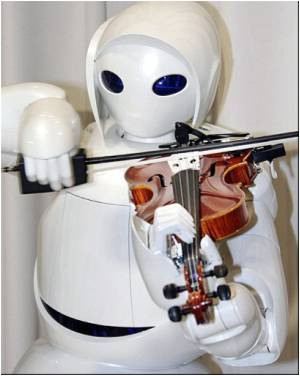 Sophisticated robotic devices may find themselves side by side with humans in the real world.

At Italy's Sant'Anna university, a bionic arm commanded by the human brain or a limb extension that allows rescuers to lift rubble after earthquakes are just some of the futuristic innovations in the pipeline.

Among the landmark research presented are predictors of disease severity in human papillomavirus-derived head and neck cancer.
Advertisement

"The idea is to get robots out of factories where they have shown their worth and to transform them into household machines which can live together with humans," says Professor Paolo Dario, director of the college's bio-robotics department.


The university in the historic town of Pisa in Tuscany is a veritable factory of ideas.

Researchers here are working on projects ranging from a robot that can come to your door to collect your recycling to tomatoes that slow the effects of ageing and plants that survive underwater to help flood-prone regions of the world.

A teenage student has designed and built a robotic head for his Year 12 Research Project.
Advertisement
"You can innovate here. Whoever has a project gets help, ideas are not blocked. We are investing in individuals," the rector of Sant'Anna, Maria Chiara Carrozza, a professor of bio-robotics said in an interview.

The dustcart looks like the famous R2-D2 from Star Wars with its laser scanner and location sensors. The idea is that it can work through phone bookings to come to your street at a fixed time to collect your waste.

"We tested it for two months with 15 families living in one of the towns near here. Everything worked well but there are still some problems to sort out," said Pericle Salvini, a member of the team behind the project.

"First of all it is slow for security reasons and it sometimes blocks the traffic. Also it cannot legally be on the road since there is no type of insurance for this type of robot in case of an accident," he said.

Professor Dario also heads up a project entitled "The Robot Companions for Citizens" which is one of six contestants for a European Union prize of one billion euros ($1.2 billion) in funding spread out over a decade.

Marco Controzzi, who is working on a bionic arm, says it will operate by using electrodes attached to the skin or implanted in your head.

"It will move only according to your intentions," he said, adding that powering it would be easy as it can run on just two mobile phone batteries.

The exoskeleton or "body extender", a prototype costing a million euros, meanwhile, is a kind of armour weighing 160 kilos (353 pounds) which multiplies the strength of its human user by 20.

"The idea is to use this type of instrument for emergency workers in disasters like an earthquake," said engineer Marco Fontana.

The world's first liver transplant using only a robot was conducted in Italy.
Advertisement
<< Thousands Participate in Samurai Festival in Japan
Gene Responsible for Rare Form of Blindness Identified >>

Robotic Assistants Might Get Accustomed to People in the Factory