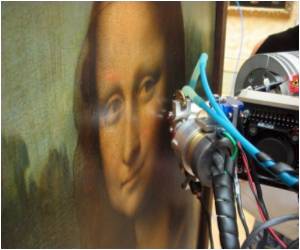 On the verge of unearthing the remains of the woman who is believed to have inspired Leonardo da Vinci's Mona Lisa - Lisa Gherardini are researchers.

The announcement follows the discovery of another skeleton, the fourth since the bone hunt began last year, beneath an altar in the church of the now-derelict Convent of St. Orsola.

New light has been shed on the painting technique that allowed Renaissance master Leonardo da Vinci to give the Mona Lisa such an extraordinary delicate charm by French scientists.
Advertisement

"The skeleton doesn't belong to the Mona Lisa, but it's hinting to her burial. Indeed, she might be just underneath," Discovery News quoted Silvano Vinceti, president of a private organization known as the National Committee for the Promotion of Historic and Cultural Heritage, as saying.


Vinceti's ambitious project aims to possibly reconstruct Lisa's face in order to see if her features match that of the iconic painting hanging at the Louvre Museum in Paris.

Neuroscientists at the Institute of Neuroscience in Alicante, Spain claim to have solved the mystery as to why some people see Mona Lisa's smile and some don't.
Advertisement
Indeed, most scholars believe that the Mona Lisa, known as La Gioconda in Italian or La Joconde in French, is the portrait of Lisa Gherardini, a member of a minor noble family of rural origins who married the wealthy merchant Francesco del Giocondo.

Known for controversial claims, like that letters and numbers are hidden inside the Mona Lisa painting, Vinceti has based his search in the convent on documents found by historian Giuseppe Pallanti some years ago.

The historian, who is not involved in the project, traced back Lisa's life from her birth on June 15, 1479, to her death at the age of 63.

Pallanti found several important documents like Francesco del Giocondo's will. There, the merchant asked his younger daughter, Marietta, to take care of his "beloved wife", Lisa.

At that time, Marietta, one of Lisa and Francesco's five children, had become a nun, so she brought her mother to the nearby convent of Sant'Orsola.

According to a document known as a 'Book of the Dead', found by Pallanti in a church archive, Lisa remained there until her death on July 15, 1542.

The record noted that the whole parish turned out for her funeral, showing that Lisa was rather famous in Florentine society.

According to Vinceti, ancient documents also appear to support the latest skeletal discovery.

"The ledgers kept by the nuns tell us that the skeleton belongs to Maria Del Riccio, a wealthy woman who died in 1609," Vinceti said.

He added that only Maria Del Riccio and Lisa Gherardini, who were not nuns, were given special burials in the convent.

"The method of burial used during this period for secular people was to stack graves one above the other," Vinceti said.

He added that georadar analysis suggests another burial lies beneath the newly discovered skeleton.

"Since Maria Del Riccio died in 1609, it's likely that we'll find the burial of Lisa Gherardini as we continue digging," Vinceti said.

Archaeologists will continue excavation until the end of October and then Then all the bones exhumed will undergo a series of tests to try to identify them.

Eventually, comparisons will be made with the DNA of Bartolomeo and Piero, Lisa's children who are buried in the church of Santissima Annunziata in Florence.

"Whether we have found Mona Lisa's remains or not will be announced early next year," Vinceti added.

The announcement was made at a news conference in Florence.

High Cholesterol is the Secret Behind Mona Lisa's Smile: Study

Mona Lisa's famous smile may have been the result of fatty acids gathered around her eye socket suggesting her high cholesterol levels, according to an Italian medical expert.
Advertisement
<< Allowing Robots to 'Talk' With Humans Is New Software
New System Helps Avoid Collisions By Letting Cars Talk To E... >>

A new study has suggested that the way we perceive art is not 'rational' when it comes to judging between the fake and real thing.
Advertisement
News A-Z
A B C D E F G H I J K L M N O P Q R S T U V W X Y Z
What's New on Medindia