Soon, An 'Intelligent Diet' That Makes You Feel Full and Yet Lose Weight 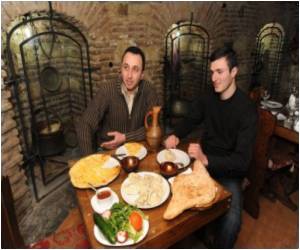 Researchers in Aberdeen are working on an 'intelligent diet', which they believe will allow people to enjoy eating and feeling full, but still lose weight.

Professor Julian Mercer, the head of obesity research at the University of Aberdeen Rowett Institute of Nutrition and Health, and colleagues are investigating how food interacts with the gut and brain to try to understand what makes people eat more and put on weight.

They want to help create foods that allow people to enjoy what they are eating, but that also means they do not pile on excess pounds.


The researchers said they already knew that food containing controlled amounts of protein helped people to feel full quicker, so that they ate less.

Superfoods should be a part of daily diet as they are packed with nutrients and healing properties.But the best part is that they are tasty too!
Advertisement
By finding the mechanisms, which cause this feeling of fullness linked to eating protein, they hope to create products and recommend diets that allow people to lose weight and keep it off.

Mercer said his team was focusing on the 'food-gut-brain axis' to come up with an 'intelligent diet'.

"We know there are certain diets that enable you to eat until you are full, but actually consume fewer calories than you might otherwise," the Scotsman quoted Mercer as saying.

"We have those observations and the sort of molecules or genes we are talking about could be just as interesting in the context of how they are involved in those sorts of processes as they are as drug targets.

"That is where we are coming from - to try to find a dietary strategy to help us tackle the obesogenic environment we are in," Mercer added.

The work will be discussed at the Scottish Parliament's Festival of Politics in Edinburgh next week.

More News on:
The Cabbage Diet The Macrobiotic Diet Height and Weight-Kids