Songbird's Playlist Could Indicate Its Mental Strengths And Weaknesses 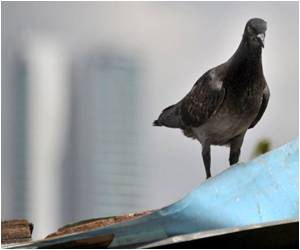 A new study shows that having the biggest playlist doesn't make a male songbird the brainiest of the bunch.

"For songbirds, singing a lot of songs indicates a bird is smart, but that signal is not necessarily indicative of intelligence for everything," said Duke biologist Steve Nowicki.

In a series of problem-solving tests with the birds, he and his colleagues found that the male song sparrows that sang the most songs learned to solve food-finding puzzles more slowly than the birds singing fewer songs. The results are the first to show that a larger song repertoire links to cognitive deficits in other mental processes.


The researchers think that female song sparrows may use potential mates' songs to gauge both mental strengths and weaknesses.

Since birdsong is a good model for studying speech development, the findings, published May 22 in Biology Letters, could also help neuroscientists better understand the trade-offs taking place as the human brain matures.
Advertisement
Nowicki and collaborators first measured the number of songs 14 male song sparrows sang. They then taught the birds to identify where a mealworm was hidden in one of 12 shallow wells on a wooden rectangle. The scientists put plastic caps over six wells so that the birds had to learn and remember spatially where the worm was on the wooden block.

The birds that learned to solve the food puzzle more quickly sang fewer songs -- an observation opposite of what the scientists expected.

"This study is very exciting," said University of Nevada-Reno biologist Vladimir Pravosudov, who was not involved in the study. "It is the first of its kind to show a negative correlation between song repertoire size and spatial memory in songbirds, and it goes against the grain of what many scientists had thought about the relationship between song and other cognitive abilities in birds."

Earlier studies with starlings had shown that the birds with larger playlists learned to solve spatial tasks more quickly. Other studies had also shown that a bird that sang more songs performed better on other cognitive tasks.

This newly discovered negative relationship between the number of songs a bird sings and speed of solving a spatial task suggests there is a trade-off between song learning and other cognitive abilities, Nowicki said.

He noted one caveat with the experiment -- the fact that song sparrows don't cache their food or migrate long distances. Both require advanced spatial learning and memory, but the ability isn't as important for sparrows as it is for blue jays and other species.

Still, the negative correlation suggests birds' brains may develop differently depending on how much effort is put toward learning songs or doing other mental tasks. Song learning happens in the HVC, the area of the bird's brain that controls song. Spatial learning happens in the hippocampus. During development, more resources may go to one area or the other, giving an individual bird a strength in one cognitive ability and a weakness in the other, Nowicki said.

The study supports the idea of trade-offs in the development of the birds' brains. But, "This behavioral data is only tip of iceberg," Pravosudov said. Scientists will need to look at the structures, circuits and chemicals in the birds' brains to better understand mechanistically what the new results mean for brain development.

Nowicki agrees and said his team may perform those experiments next. If the work pans out, he added, scientists could one day use songbirds and birdsong to better understand how trade-offs in brain development influence behavior and cognition in humans too.