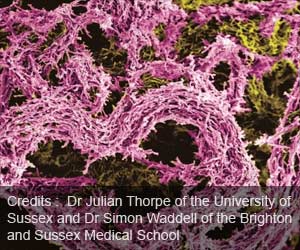 Two key proteins have been identified that allows the mycobacterium tuberculosis to "lay low" inside cells that are designed to destroy foreign invaders, reveals a new study.

Scientists have solved a decade-old mystery that could eventually lead to the development of earlier treatments for one of the world's deadliest diseases, which affects up to 2 billion people.

Advertisement
‘Discovery of the two proteins Ligase C and D could help in the designing of new drugs to treat tuberculosis by targeting mycobacteria.’

The research was carried out by the University of Sussex and the Polish Academy of Sciences.


More than 10.6 million people worldwide fell ill and 1.7 million died from tuberculosis last year while a quarter of the world has latent TB, which will develop into active tuberculosis for one in ten victims years or even decades later.
Advertisement
TB is notoriously difficult to treat with current drug treatments often producing debilitating side effects within patients, including muscle wastage and loss of sight.

The latest study establishes that a closely related protein apparatus called Ligase C, whose function was unclear until now, combines with other repair proteins to fix damaged DNA bases in mycobacterial genomes caused by the attack of oxygen free radicals.

Prof. Aidan Doherty hopes this discovery will aid in the designing of new antibiotics that could help target mycobacteria, particularly during their latent phase.

He added: "Mycobacteria are incredibly resilient and can remain dormant for many years inside cells where they are exposed to significant levels of free radical damage designed to kill foreign "invaders". However, these bacteria survive using complex repair mechanisms that protect their genomes from these attacks.

"We have shown that by removing LigC and D, mycobacterial cells become much more sensitive to oxidative damage. With further investigation of these protective mechanisms, it is hoped that this research will pave the way for the development of new drugs to more successfully target mycobacteria." ??

Dr Simon Waddell, a senior lecturer in microbial pathogenesis at the Sussex and Brighton Medical School, said: "This study defines a new DNA repair pathway in mycobacteria, a greater understanding of such fundamental bacterial systems may lead to new drug therapies and strategies to prevent the emergence of drug-resistant tuberculosis."