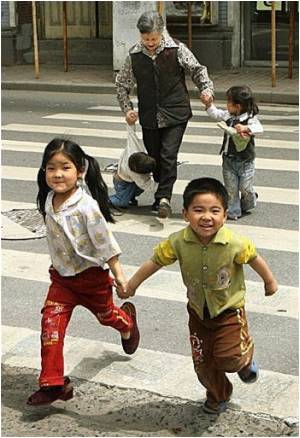 China's single child policy which always gave a powerful message is now being replaced with milder and softer slogans.

But reminders of the policy's harshest excesses are being scrubbed away in an effort to create a softer message, with officials phasing out older, threatening slogans in favour of more upbeat ones.

Adulteration of food with melamine results in the formation of kidney stones and kidney failure, even leading to death.
Advertisement

According to the People's Daily, the aim is to "make family planning work keep pace with the times and go deep among the masses".


The single child policy is unlikely to be rescinded soon, because doing so would cause uproar among those denied second children.

But it has frayed at the edges, with multiple groups, including ethnic minorities and the mothers of disabled children, being allowed a second child.

India and China, which are epicenters of a booming economy, are now witnessing a steady rise in obesity. Globalization is the prime accused.
Advertisement
Family planners are also seeking subtler approaches, such as more teenage sex education.

Slogans from the early days of the policy, which was launched in 1979, stressed punishments for couples who had unplanned pregnancies.

Typical examples included: "If sterilisation or abortion demands are rejected, houses will be toppled, cows confiscated".

These slogans conveyed "coldness, constraint and even threats. They easily caused resentment in people and led to social tension", the People's Daily said.

A report entitled Outdoor Propaganda for Population and Family Planning has called for fresh slogans, the newspaper said.

Work to scrub away remnants of the old ones began in 2007. Recent slogans will also be reviewed for suitability.

Soy or Soya is a crop which has been cultivated from thousands of years. It belongs to the family of legumes.
Advertisement
<< What Causes Lung Injury in Severe Flu?
Scientists Discover Bacterium That Could Lead to a Vaccine ... >>

Nutam (400mg) (Piracetam) Calculate Ideal Weight for Infants Post-Nasal Drip Drug Side Effects Calculator Find a Doctor Sanatogen Find a Hospital Hearing Loss Calculator Drug - Food Interactions Diaphragmatic Hernia
This site uses cookies to deliver our services. By using our site, you acknowledge that you have read and understand our Cookie Policy, Privacy Policy, and our Terms of Use